History of an Icon 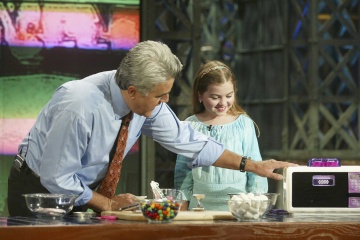 There have been numerous Easy-Bake oven baking contests throughout the years. Here, the 2003 winner, Olia Wall, appears on “The Tonight Show with Jay Leno” to share her culinary tips.
© Kevin Winter/Getty Images

The original Easy-Bake oven had cutting-edge street credibility. That is, it was street vendors who inspired the first inklings of what soon became a global toy phenomenon.

After a toy salesman named Norman Shapiro returned to Kenner headquarters from a business trip, he remarked that he'd seen street vendors cooking pretzels for passersby, keeping their doughy product warm with heat lamps. He tossed out the idea of making a toy version of that oven for children.

Now, it's worth pointing out that Shapiro didn't work for just any toy company. He worked for Kenner Products.

Kenner had a proven process for developing its toy ideas. While many other major manufacturers were content to follow trends, Kenner took a harder road by searching for unique product niches. They held regular meetings for brainstorming concepts and sharing ideas. In particular, Kenner representatives saw sales opportunities in toys that copied grown-up activities.

So when Shapiro suggested the possibility of a type of oven made for children, his words found the ears of active listeners. In particular, he caught the attention of Ronald Howes, a well-known toy inventor who was director of new product development and research at Kenner Products. Howes had already found acclaim with his Spirograph and Give-a-Show Projector.

Howes and the rest of the Kenner team set out to create a prototype oven. By 1963, they had their winner. In terms of aesthetics, the first models weren't exactly reminiscent of ovens. They looked a little like asymmetrical plastic robots and came in a choice of yellow or blue.

To create culinary delights, children slid loaded pans through a slot and into the heating chamber. Then, they could peer through the teensy window to watch as their pan of brownies baked right before their eyes. After a few minutes, the cooked product went into a cooling chamber. Then they could dig into their fresh treats or, you know, feed them to their siblings or the family dog.

It didn't take any baking skill or knowledge whatsoever to make the Easy-Bake oven do your culinary bidding. But how, exactly, did this magical box of wonderment work?