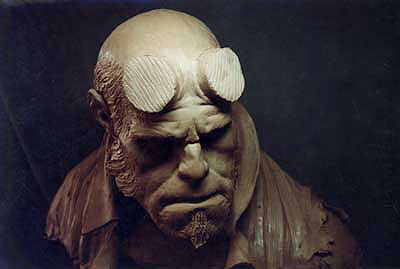 HSW: Would you tell us about the life of a makeup designer, from a HowStuffWorks take? What's a typical day like, either on a set or when you're in the shop?

Chad Waters: Well Matt for the longest time, he just preferred staying in the shop to crank out all the makeup; basically sculpt, supervise. He'd hardly go on set until this project ["Hellboy"] basically. Matt should tell the story, but he swore off it years ago, "No more set." It was "Hellboy" that actually got him to go on set again. Because me, on the other hand, I don't mind it and I go. ... Anything we worked on I'll go to set and maintain whatever we've made. If it's done in makeup -- some creature -- we gotta dress the actor, there's lots of little things that keep it running. Matt was usually just day-to-day in the shop. But part of the deal when we took the show ["Hellboy"] was, "Matt, well are you gonna go to Prague?" and he's like, "Uh, yeah." (Laughing)

As far as day-to-day stuff -- well any show really -- there's a period of "R and D," research and design where we're trying to figure out what were doin' and then we spend probably three or four months, sometimes even more -- " Mighty Joe Young" was a year in the shop ... just building the stuff. Then you have to -- when it gets close to shooting, you have to anticipate what you're gonna need on the set; how many people, what kind of materials and supplies just to maintain anything. Then it all shifts gears because when you get on the set, it's like a whole different world. Everything is so rushed, and you have to use everything you spent so long creating. And, hopefully you did it well enough that it doesn't break down or cause problems on set.

HSW: What is the typical process for the creation of each creature or character?

Matt Rose: It kind of depends on the project or piece. There's this illustrator I love working with when we can work together- Carlos Huante, who is this amazing artist. If you working on a project and he's involved, you can work right off of his maquettes. They're almost like blueprints. Sometimes, like on "Hellboy" we just start with a clay maquette. I feel more comfortable in 3D than 2D, but again in HellBoy it was all based on Mignola's [Mike Mignola] drawings. He was on the production. He was there to consult, and of course he wasn't really sure what all of this was all about. Everything was very overwhelming and we'd ask him, "Can you just do a character study of Hellboy upfront, side, back?" In the comics he's always in some punching pose or some dynamic position. He would just say, "... I already submitted a few things." Once we got to know him and after "Hellboy" was made, he made me look -- he's got this one book that has exactly what we were asking for at the time. It would have helped so much (laughing) ... to have those drawings from Mike at the time but he was just so bombarded with everything he was probably [thinking], "Who are these guys calling?"

Like Matt was saying, he went from Mike's artwork into a maquette or a 3D kind of interpretation. A lot of people go from a drawing, but that's usually very out there, exaggerated stuff. You usually put a person inside of there [the creature], so you have to pay attention to a person's anatomy as well. So on "Men In Black" for instance, on Mikey, Carlos did these beautiful sketches of that character but then Matt had to go in and basically do a mockette of the actor who was gonna be in it - you know with his anatomy and his proportions first to make sure that was all there. Then actually put the monster on top of it so that everything was related. A lot of people, they don't think of these things together. They just look at this crazy drawing and say, "Make that." You can't really make that, you might make parts of it, make it like a big puppet. But, if you want someone in there, you have to really think about it in a different way.