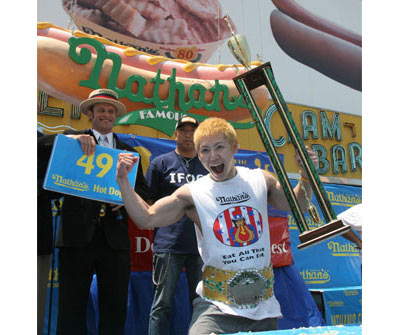 Welcome to a world­ populated by colorful characters like Crazy Legs Conti, the Black Widow, and the Tsunami. Here, pint-sized eaters compete side-by-side with hefty gurgitators, and a small woman named Sonya rules with an iron stomach.

In this article, we'll meet some of the biggest names in competitive eating, try to figure out why people hold these contests, and learn how the world's top eaters manage to pack it all in.

The Backstory
Informal eating contests probably date back thousands of years. The International Federation of Competitive Eating (IFOCE) observes that "30 hungry Neanderthals in a cave" fighting over a rabbit constitutes the first instance of competitive eating [ref]. Organized eating contests became a traditional part of state and county fairs throughout the United States in the early 20th century. These contests often focused on creating a messy spectacle, such as eating pies without using your hands, rather than speed eating.

The IFOCE was formed in 1997 to unify the many eating competitions held around the world. IFOCE rules regulate eating methods, safety standards and a growing circuit of regional qualification contests. In the past some contests were more about seeing who could eat a certain amount of food the fastest. Today's IFOCE competitions are judged by the amount eaten within a set period of time, traditionally 10 or 12 minutes. The IFOCE also tracks world records and ranks the world's top eaters.

The rules that govern an eating contest are pretty simple. The food to be eaten is either weighed, like cabbage, or cut into uniform pieces, in the case of a pizza-eating contest, for example. No one is allowed to start eating until an official gives the signal. Competitors can eat the food however they want, either breaking it into pieces or just shoving it in. They can dip the food into a liquid (usually water) to make it softer. If the food has different parts, the parts do not have to be eaten together. For example, hot dogs can be eaten separately from their buns. When time expires, any food that is already in the contestant's mouth counts as eaten as long as he or she eventually swallows it.

There's one rather gross question everyone asks about competitive eating -- what happens if someone vomits? IFOCE rules are very clear, though they are very delicate about the terms that they use to describe someone throwing up. Anyone who suffers "a Roman incident" is disqualified if the result of that incident touches the plate or table. Once time has expired, competitors can rid themselves of the massive amount of food they've just eaten however they like.

Instant replay is not used in IFOCE contests -- the ruling of the judges at the time is considered final. This can sometimes lead to controversy. In 2002, record holder Takeru Kobayashi reportedly vomited some hot dog at the Nathan's Famous Fourth of July International Hot Dog-Eating Contest, but held most of it back with his hands until time ran out.

Prizes for these competitions vary from nothing but a title to a few thousand dollars. It depends on the organizers and promoters of the specific event. Some events have sponsors who donate prizes, and well-known competitors will often be paid to travel the world giving competitive eating exhibitions.

In the next section, we'll see how they manage to eat all that food.

Competitive eaters have a few secrets that they have developed over the years to help them stuff food into themselves a little bit faster. The most basic is the water dunk. Virtually every competitor keeps a cup of water at the table to dip the contest food. This softens and lubricates the food, allowing them to chew it faster and swallow it more easily. Technically any liquid could be used, but anything that has calories will make it harder to eat more in the long run.

Another key technique is to break the food into smaller pieces before eating it. This allows competitors to fit more food into their mouths at once, and also cuts down on chewing time. Kobayashi's "Solomon Technique" (also referred to as "Japanesing") involves breaking a hot dog in half and then stuffing both halves into the mouth at once. Otherwise, it would be difficult to fit an entire hot dog at once because of the length. Almost all serious eaters eat hot dogs and buns separately.

Other than those basic tactics, competitive eating is largely a matter of willpower. Competitors must fight their gag reflexes and their stomach's natural reaction to such a large amount of food being dumped into it very quickly (what the IFOCE refers to as "urges contrary to swallowing").

It is possible to train ahead of time for an eating contest, although the IFOCE does not recommend it. Competitors can train their brains to ignore the "full" feeling (actually the stomach muscles relaxing as they stretch) by repeatedly filling the stomach with large meals or through water training. Water training requires drinking an entire gallon of water in 30 seconds. The water stretches out the stomach. Supposedly, this makes it easier to down food in huge quantities. Neither of these activities is healthy. The water exercise can be very dangerous, resulting in perforations of the stomach lining and water intoxication, which is potentially fatal.

Next, we'll look beyond training and tactics to see what makes the world's top eaters truly amazing.

The Best Competitive Eaters in the World

Just who are the world's best eaters? In IFOCE parlance, they are known as gurgitators. Although you might expect these super-eaters to be huge, they range from giants like "Hungry" Charles Hardy, at 340 pounds, to the Black Widow, Sonya Thomas, at around 100 pounds.

Here are a few of the top gurgitators:

It's easy to see from this cast of characters that there is no one type of person that excels at competitive eating. While many of the top eaters are lightweights with petite bodies, gurgitators weighing more than 400 pounds compete in the upper echelons as well. However, competitive eating fans and competitors alike have plenty of theories about what constitutes a "champion" body type.

When small eaters like Thomas and Kobayashi first arrived, some eaters developed the theory that fat actually hinders competitive eating. The idea was that a lot of fat around the mid-section made it too difficult for the stomach to expand. This theory was originally proposed by eater Ed Krachie. His paper on the subject, "Can Abdominal Fat Act as a Restrictive Agent on Stomach Expansion? An Exploration of the Impact of Adipose Tissue on Competitive Eating," was rejected by numerous scholarly journals, including the New England Journal of Medicine. However, a 2003 Popular Science article supports the theory: "The size of the stomach at rest is inconsequential. All that matters is the stomach's ability to expand, to adapt itself to the amount of food being shoved down the esophagus. A skinny man's stomach has little fat to push against it and fight the food for space" [ref]. Some eaters believe that a muscular abdomen hinders stomach expansion as well, although Kobayashi's muscular body would seem to contradict this theory.

Next we'll see some of the records held by competitive eaters.

Here are some of the unique and amazing records held by competitive eaters in IFOCE-sanctioned events.

Next we'll see what it's like to attend a competitive eating event.

You might be wondering, "What is it like to actually attend one of these events?" A chicken wing eating contest at the fourth annual National Chicken Wing Festival in Buffalo, New York provided an opportunity to find out.

A large crowd had gathered around the stage when IFOCE chairman and MC George Shea started his introductions. Shea is part carnival barker, part preacher and part stand-up comedian as he sings the praises of the world's best gurgitators to the accompaniment of blaring rock music. It's important to understand that Shea and the eaters don't really take themselves too seriously, but part of the humor that underlines the whole event is that they pretend to take themselves really seriously. Shea called one competitor, "Jammin" Joe LaRue, "The Missing Link..not between man and ape, but between man...and God!" Sonya Thomas received a lengthy introduction that referred to her as "the essence of beauty...the shadow beneath the lotus." She then emerged from the crowd wielding a Chicken Sceptre while "Hell's Bells" by AC/DC blasted through the sound system.

The crowd and the press were both very excited about the event. People were wearing t-shirts featuring their favorite eaters, and some eaters received deafening ovations from the spectators. Photographers crawled all over the area where the eaters were positioned, so much so that it was difficult to actually see any of the contest. When Sonya Thomas arrived from an unexpected direction, photographers practically stampeded to try and get a good photo. Once she started eating, she was ringed by cameras, some of them just inches from her wing-sauce covered face.

Ultimately, the real entertainment value of one of these events comes from Shea, not the contest itself. Once the eating begins, there's not much to look at. It's actually kind of gross. But Shea stalks the stage, goading the eaters into ever greater feats of intestinal fortutide, cheering them on, and discussing common problems such as "the eight-minute wall" and "the meat sweats." His hyperbole is so over the top, you can't help but laugh.

For the record, Eric "Badlands" Booker won this event, upsetting Thomas, who finished second. Booker put away 137 wings (measured by weight) to Thomas' 127.

It's not all cookies, cakes, ice cream, hot dogs and glory. Let's look at the opposition to competitive eating.

Pontential Problems
Can competitive eating be harmful? Let's take a look at some numbers. At the extreme end of the spectrum, Kobayashi eats around 50 hot dogs in 12 minutes. Estimating 150 calories per dog and 100 calories per bun, Kobayashi consumes 12,500 calories in one sitting. As a point of reference, the USDA recommended caloric intake for an adult male is about 2,300 calories.

Competitors who don't reach Kobayashi's level still routinely down 18 to 25 dogs in one contest, which is more than 4,000 calories. It's easy to see that competitive eating is not the healthiest thing to do. That's not to mention the risk of choking or damaging the stomach by filling it beyond its natural "full" point. Some competitors do not digest what they eat at a contest -- they purge the contents of their stomachs via a "Roman incident." This isn't healthy either -- stomach acids from frequent vomiting can damage the esophagus and the enamel on teeth.

According to the National Eating Disorders Association, 11 million Americans suffer from bulimia or anorexia, while 25 million more suffer from bouts of binge eating [ref]. By glorifying the extreme eating necessary to compete in eating contests, competitive eating could be contributing to these problems. The training and competing patterns of competitive eaters could also be considered signs of an actual eating disorder.

For more information on competitive eating and related topics, check out the links on the next page.