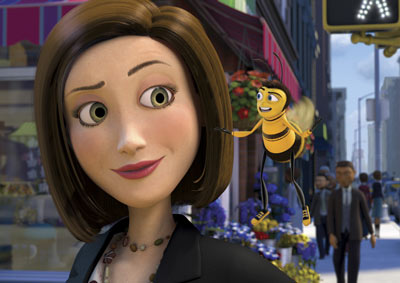 Supervising animator Marek Kochout explains the challenges of that sequence. "Just the sheer number of characters in the shot was quite challenging," he says. "Plus, you have to track them all and put them in groups so you can control the pitch and the roll and how each individual character moves. We had to make sure the wings didn't crash through the bees' backs because everything in the 3-D world has no physical limitation -- if you move something it can pass through another object. So if you made the wings too big, they'd crash through the body. There was a lot of double-checking to make sure the bees didn’t pass through each other."

And the difficulties increase when animated characters touch or pick up an object. That, says Kochout, is "because they don’t occupy any physical space, so they can pass through each other. You do it in layers and constantly go back and check."

Echoing director Simon J. Smith, Kochout analyzes the issue of scale that tested the artists and animators. "You've got shots that look over the shoulder of this tiny little bee at a human character, so any movement he makes is magnified, he says. "There was quite a perspective challenge to it. If things in the foreground were small, you couldn't be broad with their movement. You had to make sure to position the character in the correct space so it was visually appealing as opposed to relying on physics and where they would actually be in that space."

Getting the faces right was another hurdle for the animators. "Facial animation is always slow because there's so much information in faces," Kochout says. The animators used stripped-down versions of the animated characters to quickly block out their ideas, using the full-featured characters later in the process.

Designs for Barry and the other characters were basically set by the time Kochout came aboard in February 2006, but Barry needed a personality. "A lot of that came from Jerry himself," Kochout says. "He uses his hands a lot, so that went into Barry. He had great ideas and was great about giving notes on what the characters were thinking, and that made it easy for us. He really thought stuff through as far as how the joke was set up. But every now and again it was a little painful -- you'd be nearly finished with the animation and he'd say, 'That's not really funny, I have a better idea.' That happened a few times, but it was always for the better."

Kochout and his team did observe bees for research, but they were instructed to take considerable liberties in translating their movements to the screen. "Bees have a hovering, jittery feel to them," he explains. Seinfeld and the directors "didn’t really want the bees to be too insect-like. They wanted the movements to be smooth and the flying to be more airplane-like, so they would bank and roll. There were quite a few differences between our bees and the real world."

So how else do the "Bee Movie" bees differ from the real thing? Well, for one, real male bees don't have stingers or make honey. A stinger is a modified ovipositor (for laying eggs), so it's a female appendage. In real life, the female bees gather all the pollen and take care of honey production. Also, male honeybees die after mating, so that heart-to-heart between Barry and his dad? We hate to spoil things, but that could never happen. Oh, and real bees don't talk -- but we assume you already knew that.