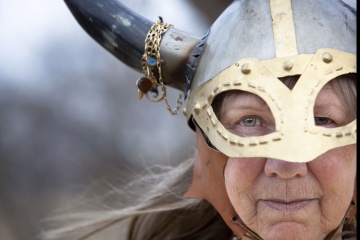 You don't HAVE to dress as a Viking to play kubb, but it couldn't hurt, right?
©iStockphoto.com/CREATISTA

In the bean bag toss or ladderball, one team is always on the offensive, and short of screaming or physically interfering with a throw, there's nothing the other team can do stop the attackers. In kubb, however, there are a number of defensive moves involved.

For one, you must think strategically when you're throwing kubbs. If you throw kubbs close to the centerline and then fail to overturn them, the other team suddenly has an opportunity to advance forward to a temporary baseline and knock down all of your kubbs from close proximity. On the other hand, if you throw your kubbs deep into their territory, they may be harder for you to knock down. But as a consolation, the opposing team won't get great field position.

Like batons, you must throw kubbs underhanded. Unlike batons, you can spin the kubbs in any direction you like. Adding directional spin can be extremely useful when you're trying to place kubbs in tricky or tight positions. Spinning the kubb precisely is often called drilling, and there are endless tactics you can use to group field kubbs as tightly as possible so that you can knock them down more than one at a time. Some kubb fanatics consider drilling to be the skill that separates amateurs from assassins.

Also, when it comes to raising field kubbs, you'll need to think ahead. The rules state that two corners of the kubb must remain touching the ground as you raise it. Because kubbs are four-sided, this means each kubb has two possible positions, or footprints. When there are multiple field kubb in question, it's generally best to separate them with as much horizontal space as possible. In doing so, you make it much harder for an attacker to overturn more than one kubb at a time, dominos style.

Penalty kubb placement also adds spice to the game. Place penalty kubbs close to the king and your opponent will worry about accidentally hitting the king. In addition, you can change the angle of the kubb. With the flat face towards your opponent, the kubb is easier to overturn, but if you turn the kubb's corner toward your enemy, you make it just a little harder to knock down.

No matter how much you hone your throwing skills, there's always an element of luck in kubb. The variation of playing surfaces means a lucky -- or unlucky -- bounce can turn a bloody rout into a heartbreaking defeat in an instant.

These elements are the essence of kubb. For many people, this is more than a lawn game: It's an obsession. It's a worldwide game with a weird name, and it's coming to a yard near you.

Full disclosure -- I had never in my life heard of kubb until I started researching this article. As someone who loves to play ladderball (but struggles to keep track of the score) I was immediately drawn to the elegance and simplicity (and touch of brutality) that is kubb. So of course I proceeded directly to a store to buy a game set. It does take some finesse and accuracy to throw batons, but after a few games I started to zero in on the kind of wrist flick it takes to zing kubbs. Although I'm very much a kubb novice, I can see just how enthralling this game must be for true devotees.