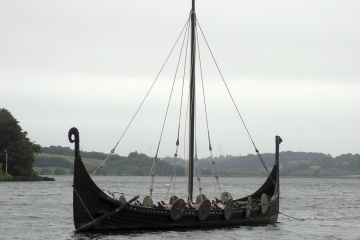 Did Viking longboats carry kubb sets? The origins of the game aren't certain, but it's sometimes referred to as Viking chess.
©iStockphoto.com/Delanvital

There are stories that kubb originated in Scandinavia a millennia ago. These tales often allude to idea that bored Vikings needed a way to kill down time, so they scavenged bits of lumber and created kubb, which is also sometimes called Viking chess.

A more exciting (and gruesome) version of the story indicates that the Vikings used human bones for the baton kubbs and a skull for the king piece. That's one way to use the spoils of war.

Yet another twist on the story indicates that the game was the brainchild of Swedish King Gustav Vikstrom III in the early 1600s. It's said that the king used kubb as a way to resolve disagreements between various factions across his lands. If there's any truth to these legends, the losers had it rough -- their livestock was slaughtered, along with their families. Suffice it to say that the stakes in modern day kubb are not quite so chilling.

No one really knows the genesis of kubb. We do know, however, that kubb's first and most stalwart backers probably originated in Gotland, which is an island just off of the east coast of Sweden. In the 1990s, kubb became more popular on the mainland, and since then it's caught on with game lovers in other parts of the world, particularly in Great Britain and Australia. In the U.S., major chain stores carry kubb game kits, a fact that proves kubb is anything but an isolated phenomenon.

These days, there are kubb clubs and tournaments in numerous countries. The world championship tournament is held annually (more or less -- the dates aren't always exact) in Gotland. Nearly 200 teams of six players each may arrive for this tournament to challenge each other for the kubb throne.

But you don't have to travel all the way to Sweden to develop a taste for this blocky diversion. You can play almost anywhere, with anyone, and it will cost you next to nothing. On the next page we'll show you just how to start on your quest for kubb glory.