by Ed Grabianowski
Prev NEXT
5 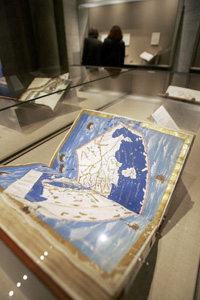 A copy of Ptolemy's "Geographia" on display at the New York Public Library in 2005.
Mario Tama/Getty Images

Claudius Ptolemy was a scientist who lived around the year A.D.100. He produced several significant works that preserved much of the ancient world's scientific knowledge. His ideas and practices came into vogue again during the Renaissance.

One of his major works was titled "Geographia," later renamed "Cosmographia." In it, he outlined his principles of geography and cartography, then provided extensive maps of the world as he knew it at the time. Although the maps were very inaccurate by today's standards, they were a major source of the European view of the world during that period.

Printing hadn't been invented when Ptolemy produced the work, and many of his hand-drawn maps were lost because of the difficult manual copying process. In the 15th century, "Cosmographia" appeared in Europe and was printed in a variety of editions, with some maps restored and reproduced with engravings, and some more modern maps included to update it [source: Newberry Library]. The quality and contents of these Renaissance editions can vary greatly, but often fetch around $20,000 [source: Christie's]. That said, printed first editions have sold for $4 million [source: Forbes]. An original version from Ptolemy's era -- if found -- would be priceless.