by Ed Grabianowski
Prev NEXT
7 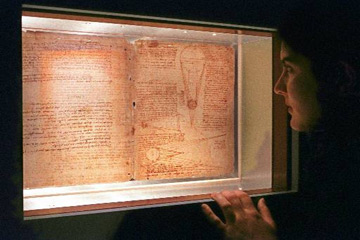 The Codex Leicester is a notebook of scientific observations produced by Leonardo da Vinci between 1506 and 1510 [source: American Museum of Natural History]. It differs from the other previously mentioned books in that it was never published or printed in any quantity. It is literally a one-of-a-kind book, handwritten by da Vinci himself.

Da Vinci was a genius whose scientific observations were matched only by his innovative inventions and artistic talent. The Codex is a direct look at his observations and thought processes. It isn't in book form -- the 18 leaves are separated, though they could fold together to form a 72-page book. Like many of da Vinci's works not intended for publication, it was written in mirror-hand: All the letters are reversed, and the writing goes from right to left. It appears "normal" when viewed in a mirror. Many diagrams and sketches are included alongside the text. The subject matter ranges from astronomy to fluid dynamics.

The Codex is named after a previous owner (the Earl of Leicester), although it was renamed the Codex Hammer when American businessman Armand Hammer purchased it. Bill Gates bought it in 1994 and changed it back to its old name. Gates paid a whopping $30.8 million for it, making the Codex Leicester the most expensive book in the world [source: CBC].