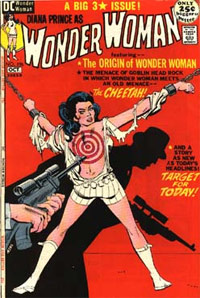 ..she's all tied up at the moment..
Photo courtesy DC Comics

The imprint of Marston's research and his personal life is all over the Wonder Woman comics he penned. Most obviously, it seems fitting that the developer of the polygraph test would outfit his super hero with a lasso of truth.

Several sources point out that in almost all of Marston's Wonder Woman comics, there can be found a full-sized panel of Wonder Woman in a bondage situation. Many of the covers during Marston's career featured men holding Wonder Woman in chains or shackles, or bound with rope. Situations involving Etta Candy and her sorority sisters, the Holliday Girls, have been compared to Marston's writings and research on sorority hazing rituals.

There's even speculation that Wonder Woman's physical appearance was based on Marston's live-in mistress and research assistant Olive "Dotsie" Richard. Marston had two children with his wife Elizabeth and two children with Olive Richard, and the seven of them (the four children, two moms, and dad) all lived together as one big family.