Truth, Dominance and the American Way 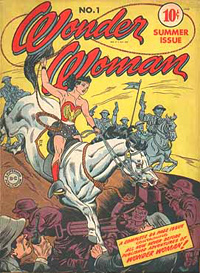 Before he created Wonder Woman, William Marston worked as a researching and consulting psychologist. He wrote extensively about what he perceived to be psychological differences between the sexes. Marston believed that women are inherently more honest, giving and trustworthy than men. Some of his work focused on the influence of dominance and submission on emotional states, including a study of sorority initiation rituals. Many of these ideas found their way into the Wonder Woman comics in one form or another. More on this later.

Marston invented the DISC test, which is still used by psychologists and counselors today to measure things like stress and social compatibility. There is some dispute about what role he played in the invention of the polygraph and the systolic blood pressure test. According to biographies, he was a pioneer in the basic idea of the polygraph -- of testing truth-telling by hooking someone up to a blood pressure machine while they are asked a series of questions. He never perfected the invention, but he was responsible for pushing the concept in the field.

He created the character of Wonder Woman during a stint on the editorial advisory boards of Detective Comics, Inc. (now D.C. Comics) and All American Comics. The editor-in-chief approached Marston looking to develop a new female character along the lines of Batman, Superman and the other super heroes of the day. In response he wrote a story called "Suprema, The Wonder Woman" which gave rise to the new Wonder Woman character (minus the name Suprema) in All Star Comics, Sensation Comics and Detective Comics. She earned her own comic book title in the summer of 1942, which moved exclusively to DC Comics in 1944. Marston wrote all of the Wonder Woman comics until his death in 1947.