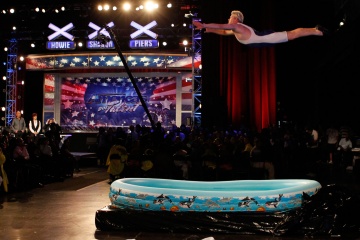 Darren Taylor, who goes by the stage name "Professor Splash," performs an extreme shallow high dive while auditioning for “America’s Got Talent” in 2011.
© Erich Schlegel/Corbis

Every swimming pool has that slightly ominous warning sign: "No Diving in Shallow End." The reasons are obvious to most people — too much velocity and too little water equal a broken neck. It seems a little nutty, then, to think that a few humans make a livelihood diving from as high as possible into what basically amounts to a puddle of water. They're called shallow divers, and they are masters of their own fears, and physics, too.

Shallow divers are essentially professional belly floppers. It is — literally and figuratively — a gut-wrenching way to pay the mortgage.

If you've ever gone swimming, you probably know the pain and suffering of a dive gone wrong. You launch from a diving board and soar towards the water below, and suddenly your animal instincts say your body's angle and trajectory are all wrong, and you hit the pool in an intestine-warping belly flop.

The water stings every inch of your skin. It slams through your bones with crunching force. You float motionless in the water shuddering, waiting for the pain of impact to fade.

Now imagine belly flopping from four stories high, on purpose. As you can probably guess, there aren't too many people out there willing to suffer the fear and physical pain of shallow diving. Those that can consistently perform the feat may turn into sideshow cult heroes of sorts, circus celebrities who make headlines all over the country and all over the world. 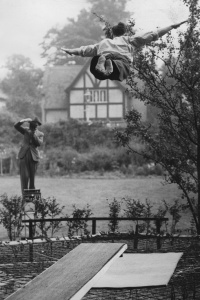 Water acts have been a part of circuses for many decades. It all started, perhaps, when performers began executing their tricks and acrobatics above pools, adding a watery element to their already impressive feats; for example, when high-wire walkers strode cautiously over bodies of water as the waves swirled below. Synchronized swimmers brought the water directly into the show, conducting graceful and splashy acts for their audiences. More recently, the Las Vegas show from Cirque de Soleil, called O, incorporated a 1.5-million gallon pool with dozens of acrobats and gymnasts all swimming, floating, dancing, swinging and much more, with dozens of physically demanding and sometimes personally hazardous elements.

In early circuses, it was only natural that diving would eventually debut. It wasn't necessarily shallow diving, though. The pools were long and deep. Like Olympic athletes, the divers concocted all sorts of fancy twists and turns to astound viewers before their splashdowns. It was a fulfilling addition to the circus atmosphere, but it wasn't necessarily jaw dropping.

Then came shallow diving. Shallow diving wasn't just an impressive feat. It was a showstopper. Many circuses built towards the shallow dive as the ultimate climax to their show.

Roy Fransen was the first truly famous shallow diver. In the 1930s and '40s, he developed a name for himself as a first-rate stuntman, first flopping into water from lower heights and gradually working his way higher. He practiced using both pools and safety nets and did so nearly every day, training his body to arc through the air to a specific spot below. At the same time, he was conditioning his mind to conquer his fears of missing his target and splattering himself all over the ground below.

Fransen was a savvy showman, too. He'd pour fuel on his body and the surface of the water below, light himself on fire and then leap to extinguish the flames. Obviously, burns were a severe risk, but so was the fact that billowing smoke made it harder for him to see exactly where he needed to fall. He eventually called his act "The Dive of Death" and traveled the world, showing off his bravado and skills to crowds everywhere.

In 1948, Fransen flung himself from a 110 feet (34 meters) high into water measuring only 8 feet (2.4 meters) deep, a record that stood for nearly half a century. It was, ahem, the apex of his career. But it didn't last. After four decades of his death-defying feats, Fransen finally ran out of good fortune. He died during a performance in 1985.

Yet shallow divers keep right on diving, and they push the heights higher and the water shallower. 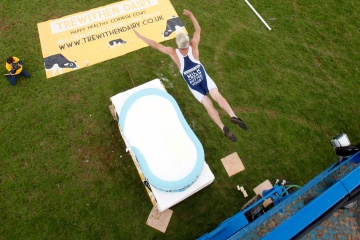 In 2012, Professor Splash made a shallow dive into a pool of milk at the Royal Cornwall Show in Wadebridge, England.
© James Ram/Handout/Getty Images

Darren Taylor, who uses the stage name Professor Splash, is currently the world record holder for shallow diving. In 2014 he set a world record when he dove 37.9 feet (11.5 meters) into about 12 inches (30 centimeters) of water. He likely hit the water at more than 32 miles (53 kilometers) per hour.

It seems impossible for human body to survive this kind of abuse, but Taylor has done it over and over again in a career that's spanned more than 25 years, with a body that's now more than 50 years old. It's obviously a survivable event. But how do shallow divers manage to escape the pool without dying, and without shattered bones and flattened organs?

Even with the best physical form, belly flops from great heights can badly hurt you. The most obvious consequences are bruises, tears or breaks in your skin, and even worse, impact injuries to your internal organs, particularly those that aren't nestled within the protective armor of your rib cage.

According to Taylor, his precise technique is the reason he's never even so much as broken a bone. The water (and the foam mats tucked beneath the kiddie pool) are obviously pretty important, too. The only side of effects of his masterful belly flopping have been a bit of internal swelling. But how exactly does Taylor manipulate his body to prevent devastating injury? 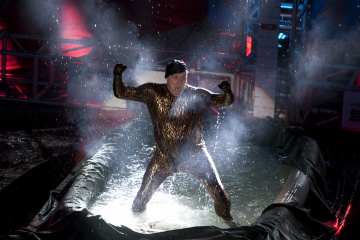 How Professional Clowns Work
'The Last Supper': The Masterpiece Leonardo Didn't Want to Paint
Exploring the Forgotten Structures of Paris