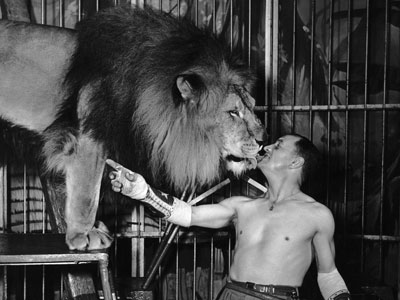 Lion tamer Jim Roose feeding a lion with a lump of meat in his mouth in October 1949. This lion is the mate of the lioness that eventually killed Roose's brother and daughter.
George Konig/Keystone Features/Getty Images

With operant conditioning, trainers teach animals to connect a behavior with a cue (or signal), and then reward the animal for correct behavior. Whenever the animal behaves in the desired way -- or even close to the desired way -- the trainer offers positive reinforcement (usually in the form of food). Skinner called this method capturing. The idea is that positive reinforcement of a seemingly random behavior increases the likelihood of it happening again. Applying a technique called shaping helps refine the behavior.

­­Let's look at an example: You're a lion trainer and you want to train a lion to turn in a circle to the right when you snap your fingers. Using operant conditioning, you'd reward the lion for any small movement to the right. Some trainers use a target to help shape this behavior -- perhaps a long stick or pole. The lion might touch its nose to the end of the pole and get a reward. Then you'd begin moving the pole in a circular motion, providing reinforcement as the lion follows the target. Eventually the lion will follow the target to move in a complete circle.

Next, you'd use classical conditioning to train the lion to turn at your finger-snap cue, instead of following the target, by associating the behavior with the snapping of your fingers. Soon the lion will turn when you snap your fingers.

If you're a dog owner, these training techniques probably sound familiar. But dogs are domesticated animals. Lions are not. Is a wild animal ever really tame? Read on to find out why the answer generally is "no."

The Cruelest Show on Earth?

Animal welfare groups have long denounced circus acts using exotic animals. They've recorded many instances of animal mistreatment, usually in countries where there are no laws protecting animals. But some activists believe that even in the United States federal regulations aren't enough. The organization Born Free claims that every major circus in America has been cited at some point for violating the Animal Welfare Act (AWA) [source: Born Free]. Examples of violations include unsafe handling of animals resulting in their escape (and subsequent recapture), inadequate veterinary care and even animal abuse [source: Born Free].­