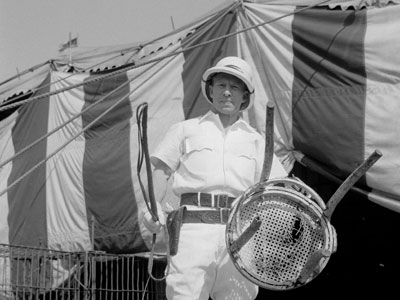 In the past, lion tamers used chairs and whips to work with lions during circus acts. ­
Jacobsen/Stringer/­Getty Images

Lion taming and training techniques have evolved over the years. The first known lion tamer, Henri Martin, earned the trust of his big cats by introducing himself to them slowly over time. At first, he interacted with his tiger through the bars of a cage, earning himself a few scratches for his trouble. Then, he entered the tiger's cage with bars separating his space from the tiger's. Introducing first his head, then his shoulders through the bars, he eventually worked his entire body into the cage with tiger. At this point, the tiger was used to Martin's presence.

­This style went out of fashion after Isaac Van Amburgh entered the scene. He used violent methods to control his big cats. When Clyde Beatty made his debut about a century later, he used a whip, a gun and a chair to command his cats. You might be wondering why a chair would intimidate an animal as powerful as a lion. It's not that the lion is afraid of the chair -- it's that the lion is confused by the chair [source: Morris]. Cats are single-minded, and the points of the chair's four legs bobbing around confuse the lion enough that it loses its train of thought. Casually put, the chair distracts the lion from wanting to claw the lion tamer's face off.

Today, lion taming (or training) techniques are more humane and exclude crowbars, bullwhips and guns. The animals aren't trained via scare tactics. Most of today's lion trainers employ a combination of repetition, trust and encouragement to train their big cats. Some animal trainers do use whips -- but only to distinguish their personal space from the lion's [source: Finn]. Once an animal trusts and respects a trainer, the trainer can teach the animal to perform tricks or behave in a certain way in exchange for food and positive reinforcement. A big cat trainer usually raises the cat from a cub, bonding with it throughout the development process. Most of the lions and tigers you see in exotic animal shows were born in captivity.

We'll learn more about today's lion training techniques on the next page.

The famous and eccentric actor Christopher Walken once worked in a circus as part of a lion taming act. He said of the lion tamer, "He must not have been very good. He had scars all over his back" [source: Rodrick].­