Browse the article How a Human Cannonball Works 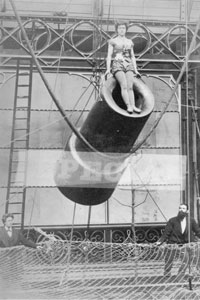 Zazel was the world's first female human cannonball. She got her start when she was only 14 years old.
Hulton Archive/Getty Images

Human beings have always dreamed of flying through the clear blue sky -- and, in some ways, they've succeeded. Parachutes, jet packs, and planes, among many other technological marvels, let us find a way to blaze through the heavens. But human cannonballs take a unique path to the wild blue yonder -- an extremely dangerous one.

Human cannonballs are pretty much exactly what they sound like: These daredevil performers pack themselves into the tight confines of huge cannons, which shoot them high into the air. This performance has a long history with roots in old-time circuses, but as you'll see, no one has mastered the art of becoming a human bullet yet.

It's certainly not for a lack of trying. People have been tinkering with the cannonball idea since the late 19th century. On June 13, 1871, an Englishman named George Farini patented a so-called "projector," which was simply a spring-loaded platform he used to flip people into the air at public venues throughout the country.

In 1873, a man masquerading as a woman, "Lulu," was the first person in America to go airborne via Farini's contraption. Lulu might've gone as high as 25 or 30 feet (7.6 or 9 meters) and, at the apex of her flight, she grabbed onto a trapeze or rope.

It wasn't until 1880, however, that a person -- a 14-year-old girl named Rosa Maria Richter, stage-named Zazel -- finally clambered inside an actual cannon, courtesy of famed circus entrepreneur P.T. Barnum. The cannon used springs to propel her into the air, as fireworks simultaneously exploded for effect. Zazel was also one of the first casualties of this circus thrill act. At another performance, she broke her back, ending her career as Barnum's first human cannonball.

Around the same time, the Yankee Robinson Circus was working on its own cannonball act. The company shot a man named George Loyal out of a cannon toward a woman on a trapeze, who would catch him in midflight. And that was just for starters.

If all of this sounds like a perilous way to make a living, well, you're right. Keep reading to find out how human cannonballs get their wings -- and what happens when landings go horribly awry. 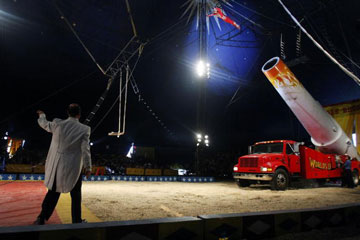 Most modern cannons are affixed to trucks that give them added stability, a factor that is vitally important when you're aiming for a small net hundreds of feet away.
Mario Tama/News/Getty Images

You might wonder how a human cannonball can survive the act unscathed by gunpowder burns. The fact is, there's actually no gunpowder used in these big cannons (and, historically, never has been), which can be more than 30 feet (9 meters) long [source: American Profile]. Instead, modern cannons employ the power of compressed air or springy bungee cords. Performers keep the exact mechanics a secret to add to their mystique and to prevent others from copying their machines.

There's nothing cryptic, though, about the basic life-or-death mechanics involved in becoming a fleshy projectile. Inside the barrel of the cannon is an empty cylinder, into which the performer climbs. This cylinder acts as a sled of sorts.

When it fires, the cannon pushes the sled forward at a force of 3,000 to 6,000 pounds per square inch (psi) of pressure [source: New York Times]. The sled stops once it reaches the muzzle of the cannon, but the person inside just keeps right on going, often sending its warm-blooded bomb to a horizontal distance of nearly 200 feet (61 meters), or 200 feet high, at speeds of up to 60 to 70 miles per hour (96.5 to 112.6 kilometers per hour).

When workers or performers set up the cannon, they have to take into account a slew of factors, including wind speed, body weight, potential obstacles (such as tree branches or guy lines, the anchoring lines that help hold the net in place), distance, humidity and even temperature. They also have to take great care in their calculations of barrel angle.

Body weight, especially, plays a major role in the act. Smaller, lighter people are easier to accelerate (and decelerate), which means that very large and heavy people do not generally pursue cannonballing as a career path.

Circus performers are keen to point out that it's not really that hard to launch a human being into the air, even to very great heights or long distances. It's the landing that causes problems. To that end, most acts use a large net or even airbags to absorb the forward energy of the "cannonball."

But even very large nets, which measure about 50 by 25 feet (15 by 7.6 meters), make for frighteningly small targets when your life depends on their proper placement and solid construction. That's why workers and performers do test runs before every performance by stuffing a weighted dummy into the barrel and launching it to see where it lands.

If their calculations are correct, the dummy makes a safe landing in the net. If not, they make careful adjustments until they've ensured that both the cannon and the net are working just right. On an off day, when the mechanics of the cannon just don't seem to be working quite right, cautious performers have been known to cancel their acts until every potential problem has been fixed.

In spite of the careful calculations, human cannonballing is still a risky endeavor. So, why do people still do it -- and why do their families let them? Surprisingly, this performance is often a family affair that spans generations. Keep reading to see how some families have not only survived a multitude of salvos but also parlayed their resulting fame into lasting careers.

Big Names of the Big Guns 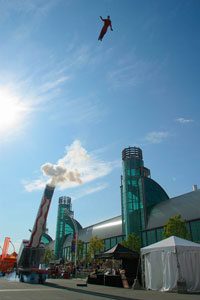 Bruises, broken bones and battered heads are a given when you make your living as a human cannonball, a stuntman or woman who generally wears only a helmet and a few pads for protection. Even scarier, more than 30 of these performers have died as a result of their stunt [source: Seattle Times]. But the danger hasn't stopped people from doing it thousands of times over.

Perhaps the most enduring celebrities of human cannonballing are the members of the Zacchini family, who performed their explosive exploits from the 1920s to the 1990s at events all over the world. There were seven brothers in the family; five of them would eventually take to the cannon.

The family often worked under contract with the Ringling Circus, which encouraged evermore daring stunts. Brothers Hugo and Victor sometimes executed a double-barreled version, in which two of them were shot simultaneously from the same cannon. Another brother, Mario, took things to an even greater extreme. He went so far as to be hurled all the way over two Ferris wheels before finding the net.

Jon Weiss is another long-lived human bullet. He began his career in 1987 and has been blasted more than 5,000 times, making him one of the most experienced cannonballers ever. At one point, he was performing the feat once a day, six days per week, for 50 weeks a year.

The Smith family, however, currently owns the most street cred for cannonballing. David "Cannonball" Smith Sr. has spent much of his life as a human cannonball. He held the world record for the longest distance until March 2011, when his son, David "The Bullet" Smith Jr., bested his father's record by flying 193 feet (59 meters).

Pros know that height, not distance, is what leaves audience members slack-jawed. Smith Sr. still holds the record for the highest shot, in which he soared over two Ferris wheels at a height of 201 feet (61.2 meters).

The biggest names in cannonballing get famous, in part, by surviving long enough for fans to recognize them. They are safety-conscious professionals who understand the dangerous appeal of the stunt, but aren't willing to sacrifice their lives to the glory of the big gun.

In other words, they appreciate carefulness. They know that throwing caution, literally, to the wind, is a bad idea if you're a human cannonball. Next, you'll get a better idea of exactly the kind of price cannonballers pay when things go wrong.

In 2006, the U.S. Defense Advanced Research Projects Agency (DARPA) published ideas for using the mechanics of a human cannon to propel soldiers, or first responders like fire fighters, onto the roofs of tall buildings. In short, the cannon would replace ladders or stairs, letting these courageous people quickly ascend to trouble spots.

I Am Your Fodder 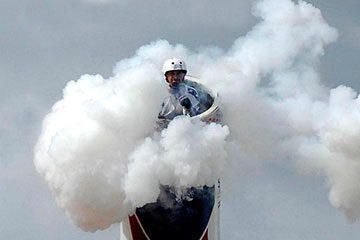 There's a cylinder inside the cannon's barrel that slides upwards after the initial blast. This cylinder stops at end of the barrel, flinging the occupant skyward.
Courtesy David "The Bullet" Smith Jr.

Human cannonballs, like most thrill acts, mostly do their stunts for the fame and glory. But sometimes, because of the trauma exerted by the cannon, stardom comes at a steep price.

In order to withstand the physical demands of the act, cannonballs have to stay in shape. Weightlifting and cardiovascular workouts help them maintain strong back, knee and core strength. Inside the cannon, they clench their bodies to stay as rigid as possible during the blast, which accelerates a cannonballer's body to top speed in about one-fifth of a second [source: The Star].

That kind of acceleration may subject them to a force of 9Gs during launch and around 12Gs at impact -- that's nine and 12 times the force of gravity, respectively. Without a good amount of body strength, G-forces can cause some people to lose consciousness, meaning there's no way for the ground-bound body to control its movements.

A conscious flyer keeps his or her eyes open to find the net, and conducts a well-timed somersault that creates a relatively soft, back-first landing, with the chin tucked tightly toward the chest. Human cannonballs aim for the back third of the net, which absorbs their forward energy but also bounces them back a good distance -- come up short on the net, and the cannonball will hit the ground on the rebound.

Sometimes, though, cannonballers overshoot their targets. One famous cannonball is Elvin Bale, the "Human Space Shuttle," who toured with the Ringling Brothers and Barnum & Bailey circuses in the 1970s and 1980s. When he set up for one show, he calibrated the cannon using his test dummy, which, unbeknownst to him, had been saturated with water. This made it heavier than normal. As a result, the cannon sent him flying past his airbags, and he ended up paralyzed in both legs.

Sometimes, things go awry in the most terrible way imaginable. In April 2011, a fledgling stuntman named Matt Cranch was executing one of his first shots for the Scott May Stunt Show in England when, just after blastoff, the net collapsed. Cranch landed on his head in front of hundreds of horrified spectators and died shortly thereafter.

For human cannonballs, though, danger is a necessary and appealing part of the show. Without the constant threat of ruinous injury or death, their acts draw no acclaim. So, in spite of the risks, they press on, slipping themselves into the cramped, dark barrels of cannons, waiting to touch the skies and the hearts of their adoring onlookers.