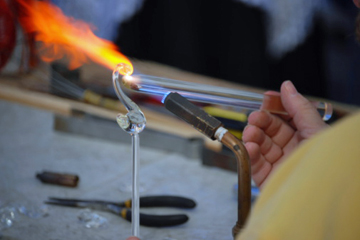 Lampworkers use a torch to heat the glass up enough to be able to work with it.
iStockphoto/Thinkstock

Not surprisingly, to melt glass in a modern fashion you need quite a few pieces of equipment in your workshop. Most can either be purchased at a hardware store, a welding supply store or a bead-making store. Here's a basic list:

Bob Ponton, veteran glass blower and office worker for the American Scientific Glassblowers Society, explained thermal shock this way: Think about a heating a 1-inch (2.5-centimeter) ring of glass. Heat it too fast and the temperature of the outer quarter-inch (0.6 centimeters) will rise faster than the middle three-quarters, and that outer piece will expand and break away from the middle layer, cracking the glass.

He also explained that the glass used for lampworking is different than that used for, say, making soda bottles. "Put a pop bottle in the torch, it will look like it exploded because the glass expanded so quickly," he said. For lampworking glass, boron is added to the glass to change the expansion rate, or what's known scientifically as the coefficient of expansion.

Before he retired, Ponton made glass used for scientific purposes, and he used types of glass with maybe four or five different coefficients of expansion for that type of work. For the glass art he makes, Ponton said sticks with one type of glass, as do most glass artists. One thing that changes the coefficient of expansion is the chemicals added to give the glass color, so artists look for a glass that gives them a great color palette and then learn to work with the properties of that particular glass.

There are different tools to cool hot glass, including:

Read on for the equipment needed for the all important steps that come between the heating and cooling of the beads.