Disney's "The Little Mermaid" is a whimsical animated film that tells the tale of an underwater princess who just wants to be human. It's a decidedly family-friendly movie that helped launch the Disney Renaissance, a period kicking off a string of hits from Mickey & Co. Nearly three decades after its release, however, "Little Mermaid" is perhaps best remembered for the golden penis that somehow wound up hidden in the background of the film's original video cover.

The truth is that there's a long history of what looks like hidden sexual images in animated films — and if intentional, perhaps these cartoons are just an extension of what some see in artwork spanning centuries. A recent study out of Brazil published in the journal Clinical Anatomy concludes that one of the world's greatest artists hid references to female sexuality in one of his best known works.

The researchers claim Renaissance master Michelangelo Buonarotti slipped naughty references in to his paintings on the Sistine Chapel ceiling. The work, which took the Italian artist four years to complete, is hailed as a masterpiece for its depiction of several scenes from the Old Testament. Within those tales, according to the study, Michelangelo also gave several nods to the female form.

The study focused in particular on the depiction of eight ram skulls that the researchers say resemble a woman's uterus and Fallopian tubes. They also note that the skulls are placed just above upward facing triangles, which were a pagan symbol for the human penis. They also point out a depiction of Eve with her arms bent in the shape of a V, and suggest this is a subtle pagan way of referencing female genitalia.

The researchers believe that the hidden images were meant as a way for Michelangelo to thumb his nose at the Catholic Church, which at the time was still debating the role of women in the church and society. There's also been speculation that the artist was upset with Pope Julius II for forcing him to take up the project in the first place.

Do the ram skulls and triangles in the ceiling artwork suggest the female and male reproductive systems? Some researchers think so.
Michael Falzone/Getty Images

Deivis de Campos, who helped run the study, said he hopes the findings will lead to "future studies that seek to elucidate other historical aspects of the relationship between art and anatomy." In other words, de Campos may be suggesting Michelangelo wasn't the only Renaissance artist who had his mind on the corporeal.

And while symbolism is a hallmark of Renaissance art, not everyone's buying this controversial interpretation.

"If Michelangelo wanted us to find a vagina up there and we're only seeing it now, then he wasn't very successful," says William Wallace, an art history professor at Washington University in St. Louis. "In some sense, I think we see what we want to see, and we are bringing our own specialties to the table."

The shape of Eve's arm position suggests a female pubic region, according to the researchers.
Michael Falzone/Getty Images

Wallace says the Brazil study follows similar research reading anatomical references into the Chapel paintings. In 1990, a physician published a paper claiming that the ceiling's iconic "Creation of Adam" is a riff on neurology. Ten years after that, another doctor claimed that the artist included a take on kidney functions in his rendition of the "Separation of Land and Water."

"The idea of leaving little secrets is a very, very modern idea," Wallace says. "What they're forgetting is that these are scenes from the story of creation in the Book of Genesis that are being presented in one of the holiest places on earth."

In fact, Wallace said two of his students in a recent class actually pointed out that the Chapel rams look "very vagina-like." If that's what it takes to keep people interested in Renaissance art, he's all for it.

"A bad idea is not bad if it keeps people looking at old works of art," he said. "It helps keep them alive," he said.

Of course, art history is full plenty of fascinating theories about the messages hidden in Renaissance art. Our Stuff to Blow Your Mind colleagues as explore one idea that God as depicted in Renaissance artwork actually represented the human brain:

Now That's Interesting
The first religious celebration held in the Sistine Chapel took place in 1483. The chapel is still used as the place where cardinals of the Catholic Church elect new popes.

Why Talking Politics With Your Drunk Uncle Is a Great Idea

Parents May Not Need to Obsess Over Burping Their Babies 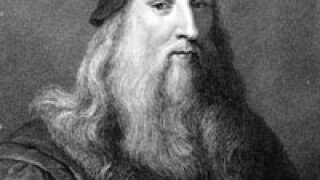 Did da Vinci really sketch a primitive version of the car? 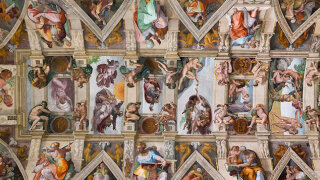 How to Make a Sourdough Starter From Scratch
April 6, 2020