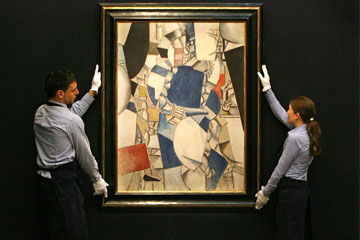 Cubism's most popular period was between 1907 and 1914, although the aesthetic lasted well into the 1930s. Early Cubist works, roughly those produced between 1907 and 1912, were part of a stage known as Analytical Cubism. The later stage, Synthetic Cubism, ran from about 1913 to 1920 [source: Guggenheim].

In Analytical Cubist paintings, subjects were typically at least somewhat recognizable. Picasso's 1907 "Les Demoiselles d'Avignon" and Braque's 1908 "Large Nude" obviously depict female forms. His "Arlequin," 1909, is recognizably a man. These early Cubist works were often composed of muted tones. While "breaking down," or analyzing, imagery, they still maintained some vestige of visual realism. Paintings were often more detailed, with images gathered tightly toward the center of the work, growing sparser toward the edges. The muted colors drew attention to the subtle shifting of perspective that embodied the artist's viewpoint.

Synthetic Cubism took the movement to its extreme -- all sense of three-dimensionality disappeared. Instead of breaking down and reassembling facets of the original image, it was a matter of synthesizing entirely new, expansive structures. Sometimes the subject was recognizable as a unified structure; at other times, it was hardly legible. Instead, artists started using collage methods; overlapping various media; and including words, graphics and patterns, to achieve a desired thematic result. Colors were much brighter, geometric forms were more distinct, and textures began to emerge with additives like sand, paper or gesso. Picasso's "Bowl of Fruit" and Braque's "Bottle, Newspaper, Pipe and Glass" are in the Synthetic style.

Picasso and Braque are considered the founders of Cubism, and their work is central to the movement as a whole. They're not, however, the only important Cubists.