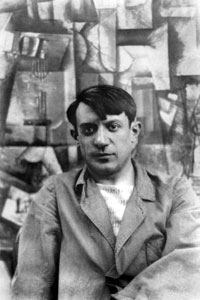 Pablo Picasso poses with his canvas, "The Aficionado," in the summer of 1912.
Apic/Getty Images

Many experts view Picasso's "Les Demoiselles d'Avignon" as the start of the Cubist aesthetic. The style was influenced heavily by the African art Picasso had seen in Paris' ethnographic museum in the Palais du Trocadéro [source: Rewald]. Its fragmented, distorted imagery, in neutrals and blues, was indicative of the art movement that would be named a year later.

However, it wasn't until 1908 that Cubism emerged as such, and it was in response to work by the movement's other founder, Georges Braque, influenced by Paul Cézanne's landscapes. (In Cezanne's words, "Everything in nature takes its form from the sphere, cone or cylinder.")When art critic Louis Vauxcelles viewed Braque's new 1908 landscapes, such as "Houses at L'Estaque," he said -- perhaps derisively, perhaps not -- that they were mostly a collection of cubes. Thus began the movement "Cubism," which developed in earnest, mostly in Paris, until 1914.

Picasso and Braque, recognized as the movement's founders and central for its duration, were at the start of something that included the most famous artists of the early 20th century. The first official "Cubist" show, at Salle 41 in Paris in 1911, included works by Robert Delaunay, Albert Gleizes, Fernand Léger, Henri Le Fauconnier and Jean Metzinger. (Picasso, Braque and Juan Gris, another prominent Cubist, were notably absent from the event since their art dealer wouldn't allow them to show at Salle 41 [source: WSJ].)

Cubism evolved quickly from its 1907 inception. Early use of monochromatic tones and single media gave way to multimedia textures, bright colors, and combinations of words and images. Early reconstruction of broken-down images into roughly recognizable form gave way to barely legible subjects, often compilations of images and words that imparted an overall sense rather than a direct representation.

The Cubist evolution is marked by two phases. The first is often called "Analytical Cubism."