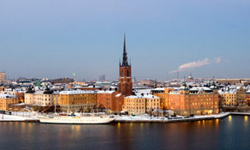 The gang who robbed the National Museum in Sweden in December 2000 knew their stuff: A machine gun will get you the haul, a bomb will distract police, and cars with flat tires can't respond to an alarm.

Their distraction tactics were superb. While three men were inside the museum, accomplices set off two car bombs on the opposite ends of town. Local police scattered. At the same time, other accomplices were laying spikes on the roads around the museum. While one man stood inside the museum with a gun, two others located the targeted paintings.

They were in an out in a half hour, leaving with two Renoirs, "Young Parisian" and "Conversation with the Gardner," and a self-portrait by Rembrandt. The paintings were valued at $30 million combined. The getaway vehicle was a speedboat (the museum is on the waterfront).

Despite the slickness of the heist, less than two weeks later police had arrested eight men, all of whom were convicted and served jail time. One of the accomplices was a criminal lawyer brought in to negotiate the ransom.

However, the works didn't start reappearing until several years later. During a drug raid in 2001, Swedish narcotics police stumbled upon "Conversation with the Gardener" [source: BBC]. In 2005, Danish police recovered the Rembrandt self-portrait during an attempted sale in Copenhagen [source: BBC]. The FBI lists "Young Parisian" as also having been recovered [source: FBI].

Clearly, any theft is made easier when the thieves are armed. But what about thieves who use costume-shop props?