If Bob Ross were alive, he'd be perhaps bemused by all the renewed attention he's receiving. Best known for his Public Broadcasting Service (PBS) TV show "The Joy of Painting," where he liked to paint landscapes with what he called "happy, little trees," Ross left behind an empire of branded painting supplies, DVDs, books and Certified Ross Instructor courses that still thrives today.

Viewers tuned in less to learn brushstrokes and more to hear his soothing voice deliver aphorisms like, "There are no mistakes, just happy accidents." So, what might you not know about Bob Ross?

1. He Learned to Paint in the Air Force.

Ross probably didn't strike you as a military man, but he was in the Air Force for 20 years. While stationed in Alaska, the Florida native saw for the first time the mountains and snow that would be recurring themes in his work. He also watched a TV show called "The Magic of Oil Painting" and took lessons from its host, Bill Alexander. Ross was a quick study: "I developed ways of painting extremely fast. I used to go home at lunch and do a couple while I had my sandwich. I'd take them back that afternoon and sell them,'' he told the Orlando Sentinel in 1990.

2. His Hair Was Straight.

What? Wasn't the curly fro his signature look? Yes, and that was the problem. When Ross was a struggling painter, he tried to save money by letting his hair grow out and getting a perm. By the time he was successful, the 'do had become part of his company's logo. "He could never, ever, ever change his hair, and he was so mad about that," Annette Kowalski, Ross' longtime business manager told NPR. "He got tired of that curly hair."

3. He Did Three Paintings for Each TV Show.

Ross got his big break with "The Joy of Painting," which aired from 1983-1994 on almost every PBS station. He made painting look so effortless, but it wasn't. He painted three versions of the same picture for each episode: One was off camera and used for reference; the second was the one he did during the show and the third was a more detailed version for use in his instructional books. He also rehearsed every word he planned to say during his show, despite the fact that the whole thing looked off the cuff.

4. He Was Short One Fingertip.

Ross lost the tip of his left finger during a sawing accident while woodworking with his father as a boy. He normally held the palette in his left hand so he could hide the missing digit.

5. He's Bigger Today Than Ever.

Ross died in 1995 from lymphoma, but somehow he's taken on a second life as a meme, Twitch celebrity and Halloween costume. The show still airs on many PBS stations. Viewers can't get enough of his calm voice and mellow personality. The network estimated that less than 10 percent of viewers painted along with him. Most tuned in for entertainment or relaxation. ''We've gotten letters from people who say they sleep better when the show is on," said Ross in 1990.

Now That's Cool
The statistical website FiveThirtyEight did an analysis of all 381 works that were shown on PBS and learned that 91 percent featured at least one tree, while 44 percent had some happy little clouds.

Delving Into the Conspiracy Theories About and Around Hillary Clinton

Who Said It: Bob Ross or Mister Rogers? 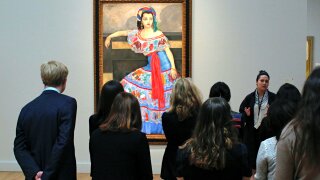