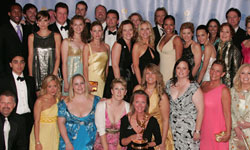 Not only is Guiding Light the longest-running soap, at more than 15,000 episodes (and still going), it is also the longest-running non-news program in U.S. television history. Like many of the oldest soaps, Guiding Light began in 1937 as a radio program before making the transition to television on June 30, 1952. Originally, the soap took place in the fictional town of Five Points, then Selby Flats, and revolved around the Bauer family. Now, it's the Spauldings, Coopers, and Lewises who are in the limelight. During the 1960s, "The" was dropped from the show's title to make it sound more contemporary. One of the show's more bizarre story lines involved cloning longtime character Reva Lewis from one of her own frozen eggs! Once the clone was born, she was given aging serum so that she would grow up fast. But she was evil and attempted to take Reva's place.