by Theresa Waldron
Prev NEXT
5

Getting Pregnant the First Time 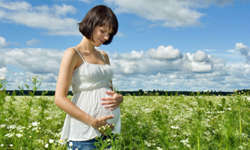 Though it's not always the case, sometimes it seems that it's very easy to get pregnant on TV.
iStockphoto/Thinkstock

Having sex one time ... especially the first time -- almost guarantees pregnancy on TV, especially in soap operas. Boy meets girl, boy seduces girl, they never have sex again, and the next thing you know there's a baby shower. But the chance of getting pregnant after just one instance of sexual intercourse is not great. In fact, the chance of becoming pregnant within one monthly cycle ranges from zero on day one to 9 percent on day 13 (ovulation occurs mid-cycle) [source: Princeton University]. And that's in couples who are actually trying to get pregnant and who have sex throughout the month. Fertility rates in women also decline with age. So women older than age 35 would be even less likely to conceive after having sex just once than women younger than age 20. What does all this mean? It's folly to have unprotected sex even once in hopes you won't conceive. But it's not a sure thing that you'll become pregnant from one act of intercourse, either.