by Josh Briggs
Prev NEXT
1 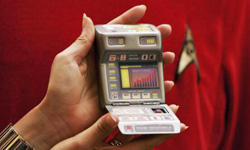 A Christies New York employee holds a replica of a newer-model tricorder in London on Aug. 2, 2006, as part of a "Star Trek" 40th anniversary celebration.
Bruno Vincent/Getty Images

How many of you remember that instrument Mr. Spock used to always carry over his shoulder, especially when the crew (usually consisting of only Spock and Captain Kirk) first surveyed a new planet? That was a tricorder.

One of the more useful instruments available to "Star Trek" personnel, variations of the tricorder (medical, engineering or scientific) were used to measure everything from oxygen levels to detecting diseases. Often times the tricorder gave an initial analysis of the new environment. So, what's the real-world tie-in? NASA employs a handheld device called LOCAD, which measures for unwanted microorganisms such as E. coli, fungi and salmonella onboard the International Space Station [source: Coulter]. Beyond that, two handheld medical devices may soon help doctors examine blood flow and check for cancer, diabetes or bacterial infection.

Scientists at Loughborough University in England use photoplethysmography technology in a handheld device that can monitor the functions of the heart. Meanwhile, researchers at Harvard Medical School have developed a small device that utilizes similar technology found in MRI machines that non-invasively inspect the body. Using nuclear magnetic resonance imaging, this device would be sensitive enough to measure samples of as few as 10 possible infectious bacteria. This kind of sensitivity (800 times more sensitive than sensing equipment currently used in medical labs) could revolutionize the way doctors diagnose disease [source: Mick].