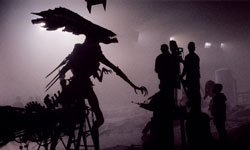 Hollywood loves a good movie monster, but like any obsessive boyfriend, it has a hard time letting go. When the spark finally fades from the cinematic relationship -- and it always does -- Hollywood presses on shamelessly, arm in arm with a monster that no one really cares about anymore.

That's why moviegoers have suffered through decades of Jason Voorhees kill sprees, endless Godzilla rampages, and more Frankenstein and Dracula flicks than we know what to do with.

To be fair, Hollywood has its economic reasons. There's nothing like a proven commodity -- even if each sequel, remake or reboot kills a little more of the magic. Freddy Krueger hasn't been scary since 1984, but we're still nine pictures deep in a pun-laden franchise of cheap scares and hokey dream sequences. Even something as exotic as the "Alien" xenomorph loses its thrill after a while.

So Hollywood, if you're listening, allow us to play matchmaker. Speed date with us as we get to know 10 of the hottest big-screen virgins ever to claw their way out of our nightmares.

We'll even throw in an elevator pitch or two, just to let you know what you're missing.

This first monster is especially captivating -- just try not to stare at its chest.