Music and business have been intertwined since about the first time some olde English peasant put out a hat, plucked a couple verses of "Greensleeves" on a makeshift lute and asked passersby to toss in a couple shillings if they liked what they heard. These days, however, it's getting more and more difficult to distinguish between music as art and music as commerce.

Pop performers load product nods and other references into their tunes to paint a picture, create a persona and maybe even make a few bucks in branding deals along the way. For businesses, getting the nod from the right celebrity in the right place can mean monster sales. Beyonce might not have had an agreement with Red Lobster to give the seafood chain a shout-out in "Formation," but the reference resulted in a 33 percent upswing in activity at the chain's registers. Maybe that's why brands are tripping over themselves to ink artist deals, buy ad space in music videos and wiggle their way into country music lyrics.

The members of the band Village People pose before a performance in 1979.
Robin Platzer/Images/Getty Images

It might seem obvious that when disco hit makers Village People gave a full-throated shout-out to a certain nonprofit charity, personal development center and short-term housing organization in their 1978 smash "Y.M.C.A.," the actual YMCA would be over the moon about the free advertising. After all: "They have everything for you men to enjoy, you can hang out with all the boys!" Who wouldn't want the attention that comes with that kind of catchy jingle blasting through the airwaves, and in every club from L.A. to Paris?

It turns out that the Young Men's Christian Association, for whom the song is named, wasn't too thrilled about being at the center of what arguably began as a gay disco anthem. Village People and the YMCA have since buried the hatchet, but it's safe to say that the organization's leaders won't be stepping out on stage in police officer, cowboy or motorcycle gang gear to belt out a karaoke version of the tune anytime soon.

"The YMCA recognizes the popularity and entertainment value of the Village People's song 'Y.M.C.A.,' and the fair use of our name in the song," says Kevin Dietz, a spokesman for YMCA of the USA. "However, we never have authorized the Village People to use the YMCA trademark to sell goods or services, and would object to any use that could cause the public to conclude otherwise."

Contrast today's statement with what former YMCA spokeswoman Leah Puow told Spin nearly a decade ago: "We at the YMCA celebrate the song. It's a positive statement about the YMCA and what we offer to people all around the world."

The YMCA's original position on the song was that they didn't like it. The organization reportedly threatened to sue Village People over the tune at the same time that it reached No. 2 on the Billboard charts. Maybe that's because the YMCA simply didn't like the idea of anyone using its name for financial gain — some 12 million copies of the track have been sold over the decades since it was released — without first asking for the organization's blessing. Or maybe they weren't all that comfortable with some of the perceived double entendres in front man Victor Willis' lyrics.

A crowd performs the choreography to "Y.M.C.A." in a London stadium during the 2012 Olympics.
Tim Clayton/Corbis/Getty Images
Groundskeepers perform the "Y.M.C.A." dance during a 2016 baseball game at Yankee Stadium. The song has become a sports-arena anthem.
Alex Trautwig/MLB Photos/Getty Images

Whether the organization likes it, hates it or feels somewhere in between about it, "Y.M.C.A." has given the YMCA a spotlight that many brands spend big money trying to attract. "I guarantee Village People didn't get a check from the YMCA for that," says Storm Gloor, a music business professor at the University of Colorado Denver. "But it absolutely works for them."

Gloor is the researcher behind a 2015 study finding that "advertainment" — product placements, branding references and name dropping — is on a quick rise in pop music.

"The companies are as excited as can be and they certainly try to influence those decisions," Gloor says of product and brand references in song. "It's no surprise that the Grammy gift bags include all kinds of products."

Maybe those bags should include a guest pass to the nearest Y.

Now That's Interesting
Producer Jacques Morali, who's credited with helping create Village People after being inspired by gay culture in Manhattan's Greenwich Village, wrote the music for "Y.M.C.A." in 20 minutes as a late addition to the band's "Cruisin'" album. Willis later added the lyrics.

When College-bound Kids Have Their Acceptances Revoked

Why Do Ads Say 'the Big Game' Instead of 'the Super Bowl'?

Guess the '70s Hit Song From Its Opening Line Quiz 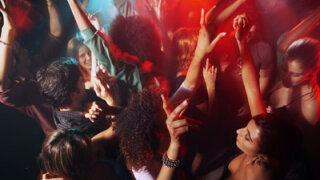