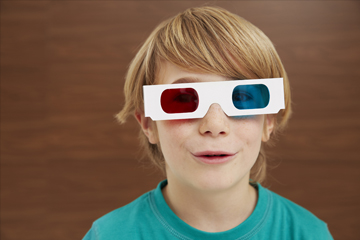 Using red and blue lenses in 3-D glasses might give the sensation of depth, but they also cause a degradation of color in the movie.
Fuse/Getty Images

3-D cinema. The first 3-D movie, "The Power of Love," screened at the Los Angeles Ambassador Hotel in 1922. To create the 3-D effect, two films were projected simultaneously while the audience watched through stereoscopes, which looked a lot like the toy View-Master you might have had as a child.

3-D movies didn't reach mass appeal until the 1950s, mostly with the cult and horror genres. This is when the white cardboard glasses with red and blue lenses came into vogue -- the technical name is anaglyph. Despite anaglyph glasses' universal association with 3-D, they're rarely used anymore.

When the 3-D movie is projected on the screen, two images are displayed: one in red, one in blue. Since each lens of the glasses has a filter, only one image can reach each eye. The brain merges both images together, which results in the illusion of an image popping or jumping off the screen.

However, using the red and blue color combination to get a sensation of depth also causes a degradation of color in the movie. The image quality is a bit fuzzy, and the color of the 3-D film always looks a little off. The industry responded with polarized 3-D lenses to create a better experience for moviegoers.

Polarized 3-D glasses don't rely on separately colored lenses to get the 3-D effect. They work a lot like anaglyph glasses, though, by tricking the brain into merging two images into one. Polarized lenses have a yellow-brown tint instead of red and blue. When light is polarized, all the waves oscillate in one direction. The camera projects one image that polarizes vertically, and another polarizes horizontally. Each lens only lets through one kind of image, and your brain merges each image into one. The end result? Crisp 3-D images with very little degradation in color or quality!

3-D viewing may be shutter glasses. You can get these with 3-D televisions, although the glasses run upward of $100 a set and are cost-prohibitive for mass audiences. To create the 3-D effect, TVs don't project two images; instead, the actual glasses flip each lens back and forth faster than your eyes can perceive the motion. The 3-D programs on your TV communicate the information to your glasses via infrared technology.