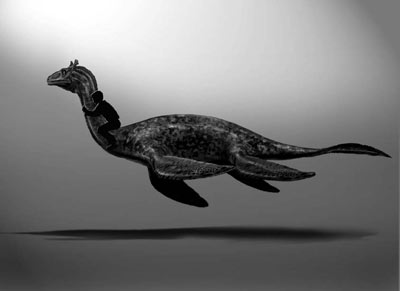 Most of the roughly 600 effects shots in "The Water Horse" are of Crusoe -- a considerable challenge because the creature had to grow rather rapidly from infant to adult. "We'd done large-scale creature effects, but we'd never dealt with a character that changed so much. We had to create many versions of the character and make sure they were all related to each other," says animation supervisor Richard Frances-Moore of Weta Digital.

Before Weta Digital came to the project, director Jay Russell developed each of Crusoe's stages with artist Matt Codd. "We decided early on that we wanted him to have elements of other animals, but no particular animal specifically," he says. "If you look at a close-up of the adult Crusoe's face, you'll see horse in it, and there's a bit of dinosaur, but if you look closely there are all kinds of other things going on. There's a bit of a dog's face in there, around the eye there's a bit of eagle. The little antler things we took from a picture of a giraffe. We incorporated elements of different animals into Crusoe so that he would have this odd familiarity, even though you've never seen it before."

The creature's newly hatched first incarnation was based on a baby chick -- bony, scrawny, slimy and more freaky than cute, according to Frances-Moore. "The translucency, the softness, the wrinkles and bags -- we'd love to have had that on Gollum [from the "Lord of the Rings" trilogy], but it wasn't feasible at the time," he says.

Crusoe's second stage was called "the puppy" because of its friendly, playful inquisitiveness -- a combination of dog and seal. Next came the "awkward teenager" and then the full adult version.

To create Crusoe, Weta fashioned maquettes (3-D sculptures) based on Codd's renderings. "With both the infant and the adult, the initial sculptures looked way too reptilian," Russell says. "We added more flesh in the face, around the cheeks … The puppy creature's face was looking too much like a lamb and too cutesy. We had to add more angles, so it looked like something that could live underwater."

Next, the 3-D models were scanned so computer renderings could provide a blueprint for skeleton and muscle structure. From there, the animators could determine scale and the limitations of the character's movement. Visual effects supervisor Joe Letteri remembers when puppy Crusoe needed to fit into a bathtub. "Once we put him in the tub and saw how much room he needed to be able to flop around, we had to scale him down a little bit," he says. "At the size we thought he was going to be, he couldn't be as playful."

The Weta team observed animal behavior to create Crusoe's movements. "Even though this is a fanciful character, we wanted it to appear that it could be a real creature that could exist," says Frances-Moore. "We also made sure that through the different stages we were thinking about what was going on under the skin of the character, where he was coming from … especially in relation to Angus. That keeps the character consistent throughout even as it's changing."