Was 'The Conqueror' filmed on a nuclear test site? 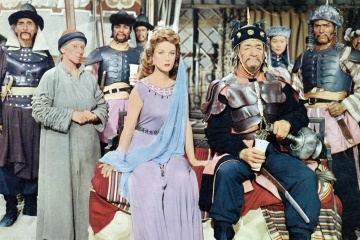 Half a century ago, we weren't quite sure of the full effects of exposure to radiation. Allegedly, 'The Conqueror' actors found that out the hard way.
RKO Radio Pictures/Getty Images

The 1956 movie "The Conqueror," starring John Wayne as Genghis Khan (yes, John Wayne as Genghis Khan) and the auburn-haired Susan Hayward as his Mongolian paramour, is generally regarded as one of the worst movies ever made. But the most terrible thing about the film isn't its bizarre casting, stilted dialogue or wooden acting. It's the fact that it was filmed downwind of a nuclear testing site and members of the cast and crew later developed cancer in what seemed to be alarming numbers.

The nuclear testing in question took place at the Nevada National Security Site from 1951 to 1963. "Operation Upshot-Knothole" in 1953 involved the detonation of 11 atomic bombs, almost all of which were larger than the bomb dropped on Hiroshima. Two of them, code-named "Simon" and "Harry," caused massive radiation fallout. The fallout from the Nevada National Security Site tended to drift directly over St. George, Utah, 137 miles (220 km) away. Because of the prevailing winds, much of it would concentrate in the Snow Canyon area. The following year, "The Conqueror" filmed in Snow Canyon for 13 weeks.

There is evidence that the film's producer, Howard Hughes, and its director, Bill Powell, knew about the radiation dangers. Hughes reportedly received reassurances from the Atomic Energy Commission that the area was safe. John Wayne supposedly brought a Geiger counter to the set. Temperatures on set often rose to 120 degrees Fahrenheit (49 Celsius) and so much dirt and dust were kicked up during filming (some of it purposefully, with fans) that the actors had to be hosed down at the end of the day. To top things off, Hughes then trucked 60 tons of the radioactive dirt back to Los Angeles for use in reshoots.

A few years later, cast and crew started developing cancer at seemingly unusual rates. Powell, Wayne, Hayward and costar Agnes Moorhead all died of cancer within 25 years of the movie's release. Another actor, Pedro Armendáriz, committed suicide when he learned his cancer was terminal. By 1980, 90 members of the 220-person crew had developed cancer and 46 of them had died. At the time, the director of radiological health at the University of Utah said this case was about three times the usual rate [source: Jackovich]. Although data from 2014 says that rate isn't too far off the mark – 43 percent of men will develop cancer and 23 percent will die from it – we don't know how many more people associated with the film have developed cancer or succumbed to it since 1980 [source: American Cancer Society]. There are also no statistics on the hundreds of Native American extras who worked on the film.

Howard Hughes was spared cancer but, perhaps out of guilt, spoke out against nuclear power in later years. In 1957, he spent $12 million to buy all existing prints of "The Conqueror" preventing it from being seen again for 17 years.