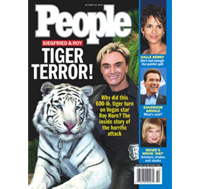 When Gene Pope bought the New York Enquirer in 1952, it had a circulation of less than 17,000 (Sloan, pg. 28). In the tabloid heyday of the late 1970s and 1980s, the National Enquirer's circulation topped 5 million (Sloan, pg. 218). Overall tabloid circulation has dropped by as much as 60 percent in the intervening years, with the Globe's circulation dropping below 1 million and Weekly World News only selling about 300,000 copies per week. Today, the National Enquirer reports a circulation of just 2.7 million, while American Media reports total circulation for the Enquirer, Star, Globe, National Examiner and Sun at 5.4 million [ref]. This steady decline shows no signs of stopping.

The decline might actually be the result of the tabloids' success. The skyrocketing sales of tabloids and their focus on entertainment rather than hard news caused the mainstream media to adopt some tabloid tactics to increase readership and viewership. When the media furor over the Monica Lewinsky scandal was at its peak, readership of tabloids actually dropped. The mainstream news outlets were giving their readers all the scandalous information they could possibly want. Today, magazines like People and Us have taken a mellowed-out tabloid formula, made it glossy and turned it into something people don't feel embarrassed to read in the waiting room at the dentist's office. Tabloid success even created an entire genre of TV show -- tabloid TV. Shows like Hard Copy and Entertainment Tonight offer viewers the same kind of stories and celebrity gossip the tabloids provide, but at a quicker pace and in a more visually appealing form.

For more information on tabloids and related topics, check out the links below.

When the Monica Lewinsky scandal and the O.J. Simpson trial became big news, many people learned that the tabloids had something going for them: a legion of thorough, dedicated reporters who were highly skilled at digging out key pieces of the story. Tabloid coverage of these events, particularly the National Enquirer's coverage of O.J. Simpson, has led to a greater degree of respect for tabloid reporters. The Enquirer broke stories about Simpson's shoes, a dealer that sold him a knife similar to the murder weapon and other important aspects of the case before mainstream newspapers reported the same stories. The increase in respect has not translated into an increase in sales, however.