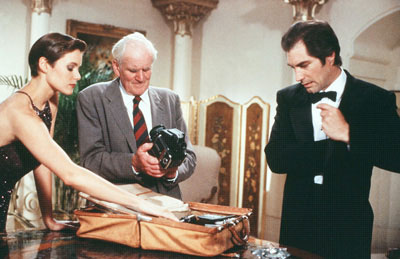 Bond (Timothy Dalton) meets with Q (Desmond Llewelyn) to receive his case full of gadgets in "License to Kill." The gadgets in this film include a camera that fires a deadly laser out of its flash component and a "signature gun" that Q has programmed for Bond's use alone.
Image courtesy DANJAQ/EON/UA/The Kobal Collection

Spy films like those starring James Bond are full of specia­l gadgets like lipstick guns, hubcap lasers, turbo hovercraft, cyanide cigarettes, missile launcher leg casts and rocket-launching radios. But which of these amazing tools actually have real-life counterparts, and which ones only exist in the realm of fictional spies like 007? You might be surprised. In this article, we'll check out the gadgets that James Bond has used and learn more about the tools that real secret agents have used to gather information, eliminate rivals and avoid detection.

In the James Bond films (and to a lesser extent, Ian Fleming's Bond novels), Agent 007 receives all of his arms and equipment, including various gadgetry and vehicles, from Q Branch. Q Branch is the research and development arm of MI6, the semi-fictional British espionage agency that employs Bond. Q stands for "quartermaster," and the head of the department uses codename Q, though the original Q's real name was Major Boothroyd. For many years, Q was played by Desmond Llewelyn in the Bond films. When Llewelyn died in 1999, Q's former assistant, R, got a promotion.

In nearly all the films, an early scene shows Bond meeting with Q to review the procedures for using the latest batch of weaponized gadgets. Depending on the film in question, these devices could be very outlandish, involving lasers, rockets, robotic drones and highly improbable vehicles. The Fleming novels stuck with a more realistic vision of global espionage. Q has some brief appearances, and his function is generally to provide Bond with the appropriate firearms for a given mission. Gadgets are rare.

Eventually, the gadgets became a formulaic plot element in the films. They fulfill the literary plot device known as "Chekhov's Gun." An item, character or location is introduced early in the story, and then largely forgotten about. Later in the story, often during a climactic scene, that item will be the exact thing needed to defeat the villain or accomplish the mission. The terminology is attributed to Russian author and playwright Anton Chekhov, who reportedly wrote of scene setting in a play, "Don't put a rifle on the wall unless it's going to go off." A perfect example in the Bond films is "Wet Nellie," a fully submersible Lotus Esprit sports car provided by Q in "The Spy Who Loved Me." Later, Bond must use its underwater capabilities to infiltrate the villain's aquatic headquarters. A similarly crucial device appears in nearly every film.

Some other classic Bond gadgets (and the films in which they appeared):

Bond can do much more than talk on this mobile phone in "Tomorrow Never Dies."
Image courtesy DANJAQ/EON/UA/The Kobal Collection 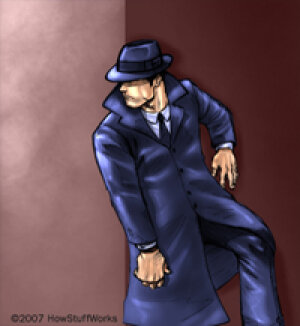