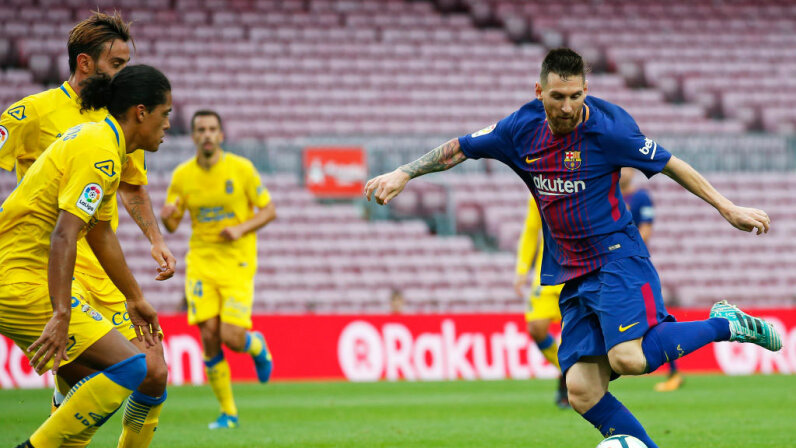 Lionel Messi makes a play during a match between FC Barcelona and UD Las Palmas that was played behind closed doors, on Oct. 1, 2017 due to the violence surrounding the Catalonia referendum. Urbanandsport/NurPhoto via Getty Images

FC Barcelona is one of the greatest professional football — no one calls it soccer outside the U.S. — teams in the history of the sport. Led by the incomparable Lionel Messi, arguably the best player in the game, FC Barcelona inspires a fierce loyalty among its fans that's nearly inseparable from Spanish politics. The club is based in Barcelona, the capital of Catalonia, and the citizens there take the club's motto "Més que un club" ("More than a club") very seriously. FC Barcelona (Barça) is indeed a more than a club — it's a way of life and a symbol of Catalonian nationalism. How it came to fulfill this role is a fascinating one, particularly at this juncture in its history.

On Oct. 1, Catalonia voted for independence from Spain. As more than 2 million Catalan citizens flocked to polling stations this past Sunday, they were met by riot police under orders from the Spanish government to stop the vote. Violent clashes left more than 900 people injured, only ratcheting up the long-running political tensions between the Catalan region and the central government.

Spanish Prime Minister Mariano Rajoy refused to recognize the "unconstitutional" vote, in which 90 percent of Catalan voters chose independence, according to Catalan officials, but just 40 percent of registered voters took part. Thousands of residents of Barcelona took to the streets for days of protests and work strikes. That included FC Barcelona, which halted all sports activities on Oct. 3, two days after it was forced to play a game "behind closed doors" — meaning no fans in attendance — as police clashed with separatist protesters outside.

Young people gather in the aftermath of a general strike called on Oct. 3, 2017 to protest the violence of the National Police during the referendum for an independent Catalonia. About 300,000 people took part.
Guillaume Pinon/NurPhoto via Getty Images

For the people of Catalonia, who have chafed under Spanish rule for centuries, the team is a living symbol of Catalan pride, and inter-league rivalries with teams like Real Madrid can feel like mini civil wars played out on the soccer pitch.

Hometown crowds at Camp Nou stadium in Barcelona often break into cries of "Independencia!" at the 17 minute 14 second mark, as they did during a 2012 game against Real Madrid, shown below. The year 1714 was the date that Catalonia lost its last great war of independence against the Kingdom of Castille.

Ironically, the team that is so closely linked with Catalan identity was actually founded by a foreigner, Swiss-born Hans Gamper, in 1899 with the support of Swiss, German and British expats, plus some local footballers. In its early years, FC Barcelona was mostly known for signing foreign players, while its crosstown rival, Espanyol, was fielded almost exclusively by Catalan players.

But the role of Barça as Catalonia's "national" team was cemented during the political upheaval leading to the Spanish Civil War in 1936. In 1935, a wealthy Catalan lawyer and politician named Josep Sunyol was elected president of the Futbol Club Barcelona. As a prominent leftist political figure in Catalonia, Sunyol was an ardent advocate of using football to forward the cause. Years earlier, he founded a Barcelona newspaper La Rambla, with the motto "Esport i Ciutadania" or "Sports and Citizenship" and wrote scathing editorials attacking the right-wing government in Madrid.

When the Spanish Civil War broke out between pro-Republic leftists and the fascist forces led by General Francisco Franco, Sunyol stood his political ground as president of FC Barcelona. Several players joined the ranks of the leftists. In August 1936, Sunyol and some compatriots drove to the front in the Sierra de Guadarrama mountains to show support for the Republican fighters, but accidentally crossed into enemy territory. When they greeted a fascist military checkpoint with a cry of "Viva la Republica!" they were pulled from the car and killed on the spot.

"Sunyol's death is now seen as the truly defining moment of the club, the desecration of an ideology in bud, of cultural separatism, independence, the right to autonomy," writes Phil Ball in "Morbo: The Story of Spanish Football."

The fascists won the Civil War and Franco was installed as a military dictator who ruled from Madrid, ruthlessly determined to purify Spain as a Castilian nation. The Catalan language was banned — as was Euskera, the Basque language to the west — as well as any public celebrations of Catalan culture, food, dance, art and history. With the martyrdom of Sunyol fresh in their memories, the people of Catalonia threw all their national pride behind FC Barcelona.

After the Civil War, writes Ramón Spaaj in "Understanding Football Hooliganism," "FC Barcelona became the symbol of an oppressed nation." Its fans even lashed out at local Barcelona rivals Espanyol, who had taken to spelling their name "Español" in the Castilian style, which was "hugely provocative," writes Spaaj.

Whether Espanyol deserved it or not, its players and fans were accused by the Barça faithful as being functionaries of the fascist centralist government in Madrid.

"Despite their geographical proximity, Espanyol and FC Barcelona have come to symbolize two diametrically opposed social, cultural and political conceptions," writes Ball, "Catalanism versus Anti-Catalanism, Anti-Spanishness versus Spanishness, and integration versus non-integration."

The passion of the separatist protesters taking to the streets of Barcelona is undeniable, but it's unclear whether Catalonia will successfully break from Spain, or what place it would have as Europe's youngest nation. It's also unclear what effect Catalan independence would have on FC Barcelona, which plays in La Liga, the highly competitive (and tremendously lucrative) Spanish pro football league. If Barcelona is no longer part of Spain, can they still play in the Spanish league?

At a press conference Wednesday, FC Barcelona president Josep Maria Bartomeu said that if independence is won, the board of directors would consider moving the team to one of Europe's other top leagues, like the Premier League in the U.K., adding, "This situation does not exist so far... It would be something to analyze calmly."

The club is also going to be one of the 11 "non-political organizations" that will be part of a commission to resolve the issues between Catalan leaders and the Spanish government. But at this point, it's difficult to know how the political standoff will end.

Now That's Cool
FC Barcelona really is more than a football club. It also fields basketball, handball and roller hockey teams, among other sports. It's the second-richest football team in the world and, unlike most pro soccer clubs, is owned by its supporters.