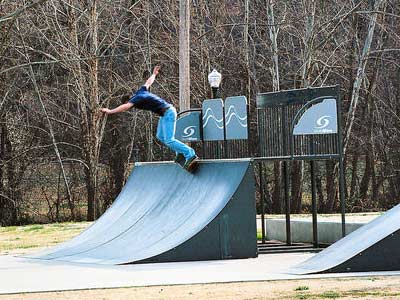 The next skateboarding boom came in 1973, and with some innovation to boot. Most notably, new wheels made of urethane -- a versatile polymer compound in the rubber family -- made for a smoother ride, and gripped the road better. This made skateboarding safer and re-energized the public's interest. New bearings soon followed. In addition, manufacturers began making trucks specifically designed for skateboards.

Just a few years prior, another technological innovation changed skateboarding forever. In 1969, Larry Stevenson patented the kick tail, which opened up skateboarding to a new level of performance beyond imitating surfing. The kicktail is the portion of board that turns up at its end and makes the majority of skateboarding tricks possible. When the demand for skateboarding came back around, Stevenson was ready. Without the addition of the kicktail, skateboarding's most famous trick -- the Ollie -- wouldn't be possible.

After skateboarding's resurgence in the early 1970s, the sport has seen a fluctuation in public interest over the years. Another surge of interest from 1983 to 1991 included the rise of vert skating. The boards at this time were wider and characterized by big wheels.

A national recession slowed the growth of skateboarding until 1993, when historians mark the fourth wave of skateboarding. Skateboards got thinner, lighter and had smaller wheels. It became more common for decks to have both a kicktail and a raised nose for increased trick possibilities. Skateboarding is still its "fourth wave" today, with no end in sight.

For lots more information about skateboarding and related topics, check out the links below.

Competitions and sponsorships have existed within the skateboarding industry since the first professional boards hit the market in 1963. Manufacturers started paying talented young skaters to tour the United States, demonstrating the possibilities skateboarding possesses for individual expression and achievement. The pros effectively captured the imagination (and dollars) of kids everywhere, selling somewhere around 50 million skateboards in less than three years. By the mid 1980s, with the combination of sponsorships and competition prize money, many young skaters were making more money than their parents. Today, sponsorships and competitions are as big as ever. If you can make it into the pro-circuit, skateboarding is just as lucrative as many other professional sports.