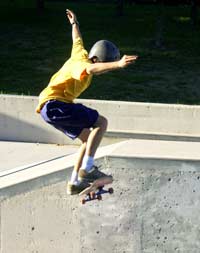 There's one skateboarding move that's foundational to tens of others, and the basis of literally hundreds of trick combinations in both street and vert skating: the Ollie, a simple jump that allows a skateboarder to gain air (as in vert skating), and hop over or onto obstacles while riding.

The Ollie is named after its inventor, Alan "Ollie" Gelfand, and discovered by pro skater Stacy Peralta while on tour in 1977. Peralta and his friends watched as Gelfland caught air off the lip of a bowl in utter amazement. They had never seen anything like it.

Gelfland developed the Ollie first in a vert setting, but later professionals, most notably Rodney Mullen, adapted the move and implemented it into freestyle and street skating.

To Ollie, a skateboarder kicks the tail of his board to the ground, or ramp, and leaps into the air. Leaving the front foot resting on the board as he jumps, he brings his rear foot up to the height of the other. The board pops up beneath him and catches up to his feet.

Let's take a look at a few other fundamental tricks and important skateboarding vocabulary:

In the next section, we'll examine the origins of skateboarding.