Was ‘The Shining’ an apology for faking the moon landing? 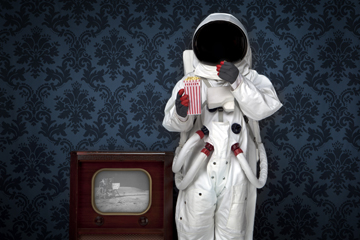 Conspiracy theorists may think the moon landing was an elaborate hoax by Stanley Kubrick, but this astronaut seems to be enjoying it.
inhauscreative/Vetta/Getty Images

What is it about some movies that makes them urban legend magnets? According to conspiracy theorists, dozens of seemingly innocent Disney animated films contain subliminal adults-only messages. "The Wizard of Oz" has spawned countless myths, ranging from suicidal Munchkins to alternate Pink Floyd soundtracks. "The Shining" is another big one -- the 2013 documentary "Room 237" features at least nine conspiracy theories connected with Stanley Kubrick's classic 1980 horror film. Was it actually about the Holocaust? A study of American imperialism? Or -- as the most elaborate theory goes -- an apology for Kubrick's role in helping NASA fake the first moon landing?

The "fake moon landing" theory is so widespread there's even a mockumentary (2002's "Dark Side of the Moon") poking fun at it. The story goes like this: NASA, desperate to best the Soviet Union in the "space race," secretly hired Kubrick to film two fake moon landings in 1968. Kubrick spent almost a year and a half creating an elaborate series of phony movies in a studio in Huntsville, Alabama, during which time he also filmed "2001: A Space Odyssey." On July 16, 1969, the Saturn V rocket carrying Apollo 11 with Neil Armstrong, Buzz Aldrin and Michael Collins onboard launched from the Kennedy Space Center but actually went into a low orbit instead of speeding to the moon. NASA then released Kubrick's footage to the media, completing a hoax so massively successful that people believe it to this day. Kubrick was tormented by his role in the stunt but faced dire consequences for letting the cat out of the bag. To ease his conscience for deceiving the world, he decided to add secret messages in to "The Shining."

The theory is Kubrick couldn't be explicit in this apology, so he had to keep things subliminal (a handmade Apollo 11 sweater is the only overt reference in the film to Kubrick's shame). Kubrick envisioned the two main characters (Jack and his young son Danny) as two sides of himself -- Jack as the practical one and Danny as the dreamer. The Overlook Hotel represents America, the harsh winter symbolizes the Cold War and the Overlook's haunted room is a manifestation of the secret NASA soundstage. But after these broad strokes, Kubrick really gets down to the nitty-gritty with all kinds of hidden messages.

In Stephen King's novel, the Overlook's haunted room was number 217. Kubrick apparently changed it to 237, because the distance to the moon is 237,000 miles (it's actually 238,857) [source: Lamb]. The hexagonal pattern on the hall carpet is a reference to the Apollo 11 launch pad design. The twin ghosts in the movie (as opposed to the novel's solo ghost) are a shoutout to NASA's Gemini program. Numerous appearances by stuffed bears represent the Soviet Union. All of these moments, according to the theory, are Kubrick's desperate attempts to express his regret.

It's definitely a far-fetched scenario. Stanley Kubrick died in 1999, so he can't weigh in on its truth (and even if he could, would he dare?). One of his assistants on "The Shining" has gone on the record to refute the theory, but it has certainly provided an entertaining rabbit hole for thousands of movie buffs and conspiracy theorists.