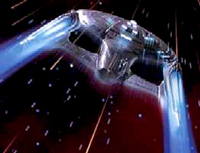 Matter-antimatter reactors power the starships in "Star Trek." Just like it sounds, antimatter is the opposite of normal matter. For example, a hydrogen atom is composed of a proton (a positively charged particle) and a much less massive electron (a negatively charged particle). An anti-hydrogen atom consists of an anti-proton, which has the same mass as a proton, but is negatively charged, and a positron, which has the same mass as an electron, but is positively charged. When matter and antimatter come into contact, they annihilate each other and produce vast amounts of energy (see How Antimatter Spacecraft Will Work). This process is perhaps the most efficient means of providing energy for interstellar travel.

The problem is not that antimatter exists or that it can produce power. The problem is that, for reasons unknown to physicists, very little antimatter exists in our universe. Theoretically, when the universe was formed, there should have been equal amounts of matter and antimatter; however, our universe consists primarily of matter. So, what happened to all of the antimatter? This is a major area of research in theoretical physics (such as quantum physics and cosmology). Tiny amounts of antimatter can be produced in particle accelerators, but it is expensive to produce. In "The Physics of Star Trek," Lawrence Krauss points out that it takes far more energy to produce antimatter today than you get from the annihilation reactions of this antimatter. In the time of "Star Trek", antimatter is common or commonly produced; we assume that humans have found an inexpensive method of producing antimatter by that time. This is a case of willing suspension of disbelief.