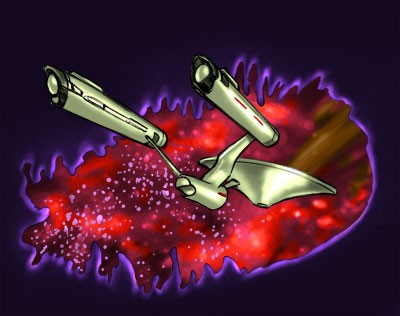 The Enterprise faces off against a large amoeba-like alien.

In an episode of the original Star Trek series titled "The Immunity Syndrome," the Enterprise encounters a gigantic single-celled organism resembling an amoeba. The organism is perhaps thousands of kilometers across, much larger than the Enterprise. In fact, the Enterprise penetrates the organism's cell membrane and goes into its cytoplasm to destroy it. Could such an organism be possible?

In addition to short distances, cells need a large surface area for diffusion to be efficient. Most cells are spherical or cuboidal. Let's look at an example of a spherical cell with a radius (r). The volume of a sphere is given by the formula V = 4/3 r3, while the surface area is given by the formula A = 4 r2. As the cell grows and r increases, the volume gets much larger than the surface area (volume is a cubic function of r, while, surface area is a square function of r). As the cell grows, diffusion can no longer bring materials into the center of the cell because the distance becomes too great. So, a practical limit on the size of a single cell is about 100 microns in diameter or less. Gigantic single cells like that depicted in the Star Trek's "The Immunity Syndrome" could not survive. Large organisms, including humans, are made of many small cells and use circulatory systems to deliver oxygen and nutrients to cells and to remove carbon dioxide and wastes from them.

On a related note, several 1950s films such as "Them" depict large insects like ants and spiders that are as large or larger than a man. Even "Harry Potter and the Chamber of Secrets" has a huge spider and many spiders the size of dogs. Insects have no active ventilation system (such as lungs) to bring in air. Instead, they rely on a system of branching tubes called trachioles to bring air close enough to each cell in their body and rely on diffusion of air through these tubes. The larger the insect, the greater the distance the air must travel and the less efficient diffusion becomes. So, this is why you do not see gigantic spiders and ants roaming the planet.

Another reason for not seeing large insects is that their long thin legs would not support large bodies in normal Earth gravity. So, the alien from the "Alien" movie series would probably not be able to walk around in normal gravity. The largest land animal is the African elephant and it has four large, broad legs to support its body weight. The appearance of large aliens is still a popular attraction in many sci-fi films, but you do not see large single-celled aliens much anymore.

Science continues to evolve and new discoveries are made all of the time, so someday we may look back on some of these mistakes with the amused nostalgia that viewers of films like "Robinson Crusoe on Mars" feel today. But as long as the science is plausible, the film doesn't push our willingness to suspend disbelief and (some would say, most importantly) the story is engaging, we can always enjoy science fiction.

For lots more information about science fiction and related topics, check out the links below.

For most of sci-fi movie and TV history, aliens had to be played by human actors in alien costumes. This made it difficult for aliens to have shapes other than humanoid. However, the advances in animatronics and computer animation, made it possible to make aliens look very different from humans. You cannot make an alien look too different from a human because the audience must recognize the character as an alien. Psychologically, we are very good at recognizing humanoid shapes, so an alien shaped like a coffee table would not be very effective in a film.

Likewise, many aliens speak English in sci-fi films (unless you want to read subtitles, which many moviegoers do not). This is generally accounted in stories by the use of some translation device (such as Star Trek's universal translator and the Babel fish in "Hitchhiker's Guide to the Galaxy"). It would be unlikely for an alien species to speak English or even develop language as we know it. "Contact" handles the idea of deciphering alien communications well: the radio message is mathematically encoded and translated with a symbolic primer. An episode of "Star Trek the Next Generation" titled "Darmok" also handles it well. In Darmok, the aliens used metaphor to communicate, which couldn't be understood by the universal translator.