Could you run a TV network from your home? 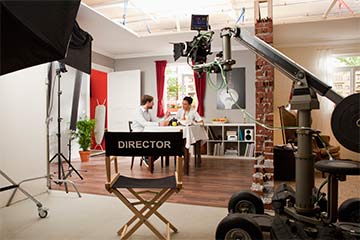 Could you have a network broadcasting from your own home?
Caspar Benson/Getty Images

You might be surprised to learn that setting up your own TV network and operating it out of your home is actually pretty doable. Of course, that all depends on how ambitious you want your station to be. If you're considering an actual broadcast tower to run a local affiliate, well you're probably out of luck. Not just because a transmitter would cost you a few hundred thousand dollars to set up, but you'd also likely have some pretty annoyed neighbors if you construct a massive broadcast tower on your property.

But the finances and logistics aren't the only things preventing you from starting a local affiliate: the Federal Communications Commission is a major roadblock too. In the United States the FCC is still converting broadcasting from analog to digital transmission (as of early 2015), and until that's complete, it's not accepting bids to license any new commercial television stations.

So despite these obstacles, you still want to get your message out via the airwaves. You have some show ideas, and maybe even some potential advertisers. And since you're reading this you've heard of the Internet. Maybe you even suspect that broadcast television is on its way out and the Internet is going to be the future of television. If you're serious about producing your own video content from home, there are a few companies that can help you start to build your media empire.

YouTube: It may seem obvious, but a personal channel on YouTube may be the easiest way to start your own home TV network. It's free, it's quick and it's internationally available so your potential audience is pretty much every person on earth.

Livestream: If you're more serious about your programming, Livestream offers a platform to broadcast from, plus a few options that can even hook up to HDMI cameras to broadcast directly. It also offers software and studio equipment to get you started. The most expensive platform plan runs to a little less than $1,000 a month, but also allows you to insert your own advertising into your programming.

ViewSat: ViewSat is a company that was originally started to run religious digital satellite broadcasts to Sub-Saharan Africa, but has evolved into a more general video content distributor. Based in the U.K., it has been expanding its services into the Middle East, Europe, North America and Asia. All you need to set up your own channel is some video of your own.

10 Most Game-Changing Developments in the TV Industry
Treat Yo Self to the 'Parks and Recreation' Quiz
When do TV commercials need to use disclaimers?