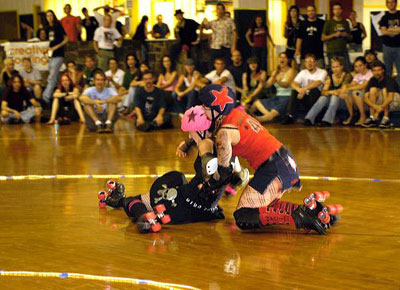 Opposing jammers come to blows during a bout. This major penalty led to time in the penalty box and a backwards-skating race.
Photo courtesy Frank Mullen / The Atlanta Rollergirls

Even though a bout can look like a no-holds-barred free-for-all, the sport has rules that cover everything from game play to sporting behavior. Rules can vary from league to league, but an organization, the Women's Flat Track Derby Association (WFTDA), previously the United League Coalition, has been working to standardize them for an interstate invitational tournament.

Some rules directly affect whether the jammers earn points. In most leagues, jammers:

Other rules govern all players' conduct during the bout. Blocking is legal (and encouraged), but players cannot grab, pull or trip one another. They also can't block from behind, "clothes-line" opponents or prevent out-of-bounds opponents from getting back on the track. Although players can use their arms and elbows to block, they can't use their elbows above the shoulder or block with completely extended arms.

Breaking any of these rules can lead to time in the penalty box. Players spend sixty seconds in the penalty box after accruing four minor penalties or committing just one major penalty. This may not sound like much time, but a minute can be more than half of a jam.

Major penalties can lead to expulsion from the game or comical punishments, like sumo wrestling and backwards-skating contests. Major infractions include deliberately falling in front of other skaters, fighting, fouling skaters who are down, insubordination to officials and other unsporting conduct.

In spite of rules that govern skating and blocking, players can -- and sometimes do -- get hurt. Next, we'll look at roller derby safety and injuries.

Hot Legs Hooligan on the Popularity of Roller Derby

"It gets girls into good physical shape, girls that might not be the gym-rat type. It's one of the few opportunities for women to be physically aggressive and test themselves against other women in a way besides just competing over looks or guys."