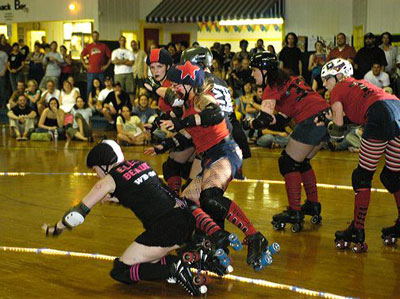 Most women's roller derby leagues have the same philosophy regarding new skaters -- physique is irrelevant, and it doesn't matter if someone hasn't worn skates in years. Leagues hold practice sessions to teach the rules and basic skating techniques, and no one actually competes until the team is confident that they can do so safely. Leagues also encourage players to skate whenever they can in addition to organized practices.

Endurance and skating practices use traditional roller derby drills, modified hockey drills or exercises that the players have developed themselves. In addition to building endurance, these drills reinforce the players' abilities to:

In addition, drills encourage players to stay aware of their surroundings and react to the unexpected. "They used to throw stuff at us," says Big Red. "It was great."

Other sessions involve scrimmage bouts between the leagues' teams. Many leagues separate the new skaters from the experienced skaters during practice bouts in an effort to make sure that no one gets hurt. Next, we'll look at what happens during a typical bout.