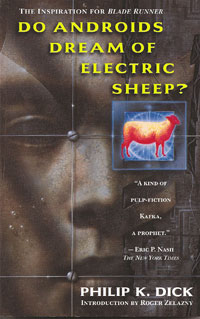 In Philip K. Dick's novel, "Do Androids Dream of Electric Sheep?" Earth is ravaged after World War Terminus (WWT). Dust from the war begins a plague that exterminates almost all animal life on the planet. No one knows who started WWT, or even who won the war.

Those who are still alive began emigrating off-world. Most people are permitted to leave the planet, though some with lower intelligence quotients -- called "chickenheads" or "antheads" -- must stay on Earth to avoid contaminating human heredity. Those who stay behind, even people of normal intelligence, run the risk of being called "biologically unacceptable" -- though some stay anyway, perhaps because they simply don't want to leave their homes.

Replicants -- simply androids or "andys" in the book - are created to be "synthetic freedom fighters." Their military background might explain some of their willingness to kill. Once the war is over, the U.N. mandates that all emigrants are entitled to an android to take with them to the colonies.

Genuine animals, being highly rare, are highly prized and hard to afford. Deckard owns an electric sheep, and one of his reasons for wanting to retire his list of android targets, each of which nets him a $1,000 bounty, is to earn enough money to pay for a real animal.

Screenwriter Hampton Fancher adapted the book into a script called "Dangerous Days," and though Ridley Scott initially turned it down, he took on the project after several months' consideration [source: Greenwald].

Upon its release in 1982, "Blade Runner" had a tough time finding an audience. Budgetary concerns drove the filmmakers to make some changes to the movie, and these changes may have made it difficult for audiences to relate to the film. It's also possible that Harrison Ford fans, who had just seen him in the more light-hearted adventure "Raiders of the Lost Ark," may have been expecting a similar movie. Whatever the reason, Blade Runner was retired as a box-office failure.

That might have been the end of it, if not for its cult following. The movie came out on home video. Then a Warner Brothers executive found a print of Scott's original cut, which the studio lent to a theater showing a 70mm film festival [source: Kaplan]. The showing attracted large crowds who wanted to see Scott's original cut. Fueled by this success, Warner Brothers released the Director's Cut in 1992 with some of the missing material.

To commemorate "Blade Runner's" 25th anniversary in 2007, Warner Brothers is releasing a Final Cut. The movie is essentially the same as the Director's Cut, but has been remastered with 5.1 audio and restored special effects. At 8,000 lines per inch, the digital scan of the movie is four times the resolution of other movie restorations [source: Kaplan]. The five-DVD special edition, scheduled for release in December 2007, includes five versions of the film, including a work print. It also features a documentary and a disc of other bonus content. There should be more than enough here to keep even the biggest "Blade Runner" fans happy -- unless they'd prefer the Ultimate Collector's Edition, which comes in a replica Deckard briefcase and includes a piece of the film encased in Lucite.

­On the next page, you'll find more information on androids and related topics.