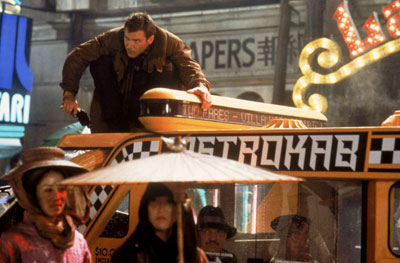 A blade runner is a police officer charged with killing, or "retiring," replicants. Of course, blade runners don't want to take a human life mistakenly, so they test their targets first. The Voigt-Kampff test measures involuntary biological reactions. First, the blade runner sets up his equipment, which monitors physical signals like muscle movement in the subject's eye. Once everything is ready and the subject sits still, the blade runner asks questions designed to touch on the subject's morals -- questions which should produce a noticeable emotional response. The machine works a little like a lie detector, measuring subtle changes in a subject's blush response and eye motion.

Since real animals are extremely scarce, blade runners ask questions that involve hurting or killing animals, which would produce a detectable emotional response in humans, but not in replicants. At least, that's the theory.

­The Voigt-Kampff test can identify Nexus 6 replicants within 20 to 30 cross-referenced questions. But more sophisticated replicants may pose a greater challenge. It takes more than 100 questions to identify Tyrell's assistant Rachael as a replicant. With its implanted memories, Rachael truly believes that it is human.

Once the blade runner identifies a replicant, it's sure to try to defend its own life at all costs. Replicants can be aggressive killers, so a blade runner's job is extremely dangerous. So why do they take on the job? Mostly, it seems that no one else wants to --even Deckard quit at one point. His old supervisor Harry Bryant forces him back into service, though, when Bryant's best blade runner, Dave Holden, is shot by one of the escapees, and the other four killers are still on the loose. Deckard is simply Bryant's best chance of taking down the four "skin jobs" before they embarrass him and the police department.

"Blade Runner" is set in a futuristic world, but the idea of androids that are virtually indistinguishable from human beings isn't all that far fetched. Next, we'll look at some of today's uncannily humanoid robots.

Would a Cylon Pass the Voigt-Kampff?

Chances are, one of the numbered Cylon models would pass the Voigt-Kampff test. Their highly advanced systems allow them to hide undetected among human Colonial citizens, even upon medical examination. If their advanced biology allows them to reproduce with humans, they can probably control their eye muscles during a Voigt-Kampff examination.