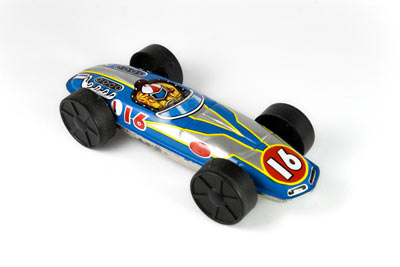 When cutting a Pinewood Derby car, you want to make sure that the wheels are perfectly round and balanced, with the axle hole dead center in each wheel.
Alejandro Duran/Dreamstime.com

As a former Cub Scout who has many fond memories of building pinewood derby cars with my father, here are some thoughts that may help.

Pinewood derby races are not held in a vacuum, however -- they are held in air. We know that in air, a heavy steel ball falls much faster than a feather. So you want the car to be as heavy as possible. Here's why: The force acting on the car is calculated by the formula Force = Mass x Acceleration. The acceleration due to gravity is a constant. So the more mass, the greater the force acting on the car. This force is competing against the force exerted by aerodynamic drag, so you want as much mass as possible to increase the force. (If you could somehow cut the weight in half and in the process cut the aerodynamic drag by more than half, that would be a good reason to not use the maximum weight. On a pinewood derby car, it would be nearly impossible to do that because things like the wheels and axles are producing most of the drag and there is no way to eliminate them.)

As the car rolls down the track, there are three frictional forces that slow it down:

Imagine that the tires were made of soft, sticky rubber -- tire stickiness would be a big source of friction. Since you have no control over the tires, you can ignore stickiness (and other factors having to do with the tires like diameter, rotational inertia, etc.).

So let's look at the remaining two factors: air resistance and axle friction. Your son's idea is interesting. Let's say that you could design a car so that it actually flew; with the wheels just off the ground, axle friction would fall to zero. Any wing that generates lift also generates drag in the process (see How Airplanes Work for details). So the question becomes, "Which is worse -- the aerodynamic drag of the wing or the friction of the axles?" The only way to determine the answer definitively would be through experiments, and these experiments would be tough without very sensitive and specialized equipment. Or you would have to build a number of cars and see how they performed compared to each other.

I am going to guess, however, that axle friction is lower than aerodynamic drag created by lift. Therefore, you would want to create a car with the lowest aerodynamic drag possible and work to drive axle friction to zero. One thing I do know is that the axles can generate a LOT of friction. What you want to do is polish them (chuck them up in a drill and polish with steel wool, then rouge) and then use a dry silicon and/or graphite lubricant to reduce friction. You also want to make sure that the wheels are perfectly round and balanced, with the axle hole dead center in each wheel.

Hope that helps. Enjoy the race!

5 Times David Bowie Was Censored in the Past
What is TV Everywhere?
How P.T. Barnum Worked