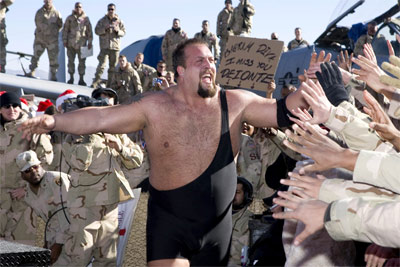 WWE RAW Superstar The Big Show greets soldiers in Afghanistan as he walks to the ring. The Big Show has gone from heel to face and back again many times during his 10-year wrestling career.
Photo courtesy Journalist 1st Class Kristin Fitzsimmons / U.S. Department of Defense

The wrestling code is called kayfabe, an old carnival term. In wrestling, it refers to the illusion that the characters and storylines are real. It was once an important wrestling code, and some wrestlers even stayed in character outside the ring to reinforce the illusion. To "break kayfabe" was to step out of character in the ring, or dispel the illusion. This dampened fan enthusiasm and hurt business, so promoters were not too kind to wrestlers who broke kayfabe, often writing them out of important storylines or not using them at all.

Kayfabe is not as important today. Pro wrestling is more or less open about the fact that the stories and plots are predetermined. They rely on the fans' willing acceptance and desire to be entertained by the stories, but wrestling performers still need to stay in character during a match. When a wrestler breaks kayfabe, it is a shoot. A shoot can be a match where the wrestlers get angry and actually fight each other instead of using the choreographed moves. It can also happen when someone accidentally uses another performer's real name, or when behind-the-scenes events spill into the ring.

So now you know what "kayfabe" means. But what about those other terms that announcers use? Why is one of the perfomers a "heel" and the other one a "face"? Here are some common wrestling terms:

Next, we'll discuss the rules that are made to be broken.

Many former wrestlers, including Jesse Ventura, have admitted to using steroids in the past. Observant fans have also noted wild changes in weight and physique, and irrational behavior outside the ring. In the 1970s and 80s, steroid use was nearly epidemic, and some suspect that the extremely high expectations placed on today's performers have led more than a few to rely on illegal and dangerous drugs to boost their physique.

Wrestler Eddie Guerrero died recently of heart disease, but his past steroid use may have been a contributing factor. This event pushed WWE owner Vince McMahon, Jr. to institute random substance abuse testing for all WWE performers.