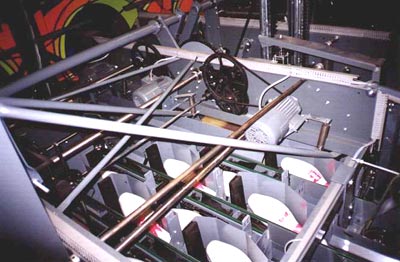 If you've ever been to a bowling alley, you know that one of the coolest things is how the pins get reset. How does it work? Take a peek at the machinery behind the scenes!
2008 HowStuffWorks

In­ the early days of bowling, respotting the pins was a physically demanding job. There were actually people behind the lanes resetting the pins and sending back the balls.

Today there are amazing robotic devices that do all the pin setting. The automatic pinsetter, first patented by Gottfried Schmidt, was introduced by the American Machine and Foundry Company (AMF) in 1946. This first pinsetter was a monster, weighing nearly 2 tons (1.8 metric tons) and standing 9 feet (2.7 m) tall.

Modern pins­etters are but a fraction of a size of their predecessors and much more intelligent. In this article, you will see how bowling pinsetters are able to pick up standing pins, clear the lane of any knocked-over pins and accurately reset the pins after every ball.

Many different versions of the game exist around the world, but the most popular is tenpin bowling. You roll a bowling ball down a slick lane to knock down 10 pins, which are in a triangular arrangement facing you. On either side of the lane are gutters that will trap the ball if it veers too far to either side of the lane.

A set of 10 pins is known as a rack. A game is made up of 10 frames. The job of the pinsetter is to create each rack at the beginning of each frame, and clear away knocked-over pins so they do not get in the way. Most modern bowling facilities have computerized bowling lanes that display your score automatically throughout the game, and the electronics and sensors in the pinsetter also help keep track of the score.

Now let's learn about the machine that sets up the pins after every roll.

In the late 1990s, Cosmic (or Extreme) Bowling was introduced, adding strobe lights, fog machines, glow-in-the-dark bowling pins and loud music into bowling centers in an effort to attract a younger audience to bowling.

The pinsetter sits quietly at the end of the bowling lane, waiting for the bowler to roll a ball toward the pins. A Brunswick GSX pinsetter, which is the one we will look at in this article, is one of the newest pinsetters in the bowling industry. The Brunswick pinsetter consists of four main parts:

Altogether, there are over 4,000 individual parts that go into resetting the pins after you roll!

An automatic pinsetter works with a total of 20 pins, twice the number needed for the 10-pin arrangement. The pinsetter goes to work in cycles, set procedures that are executed after a ball has been rolled. To be able to react appropriately, the pinsetter needs to know exactly what has occurred below it on the lane, whether it be a strike or a gutter ball. Modern pinsetters interface with a small CCD scanner camera that is mounted farther down the lane. The camera quickly senses exactly which pins have been knocked down, and then relays this information to the pinsetter. In older pinsetters, this function was performed by the pinsetter itself. It would lower itself onto the lane and use "fingers" to determine which pins weren't standing. Most newer pinsetters still have the "fingers" as a backup to the CCD camera -- they may use them during situations when the camera cannot function properly.

Bowling is one of the world's most popular sports.
Photo courtesy Brunswick Bowling

­­ The next step depends on exactly what has occurred on the lane. Let's examine the cycle that most often occurs when amateur bowlers are on the lane, typically called the "first ball - standing pins" cycle. This cycle runs when a bowler, on the first roll, knocks down between one and nine pins. The pinsetter needs to accomplish three distinct tasks:

The process is set in motion after the bowler rolls a ball down the lane.

Now that the remaining pins are out of the way, it's time to get rid of the pins left on the lane!

The National Bowling Stadium in Reno, NV -- dubbed "the Taj Mahal of Tenpins" -- features 78 bowling lanes, an IMAX theater and the world's longest video screen stretching across the top of the lanes.

Out with the Old

The next step is to sweep away the deadwood. The sweep that had been in the "guard" position is pulled back and forth one time in order to sweep away the knocked-down pins that are still on the lane. These pins are then moved via conveyor belt back into the pin elevator. They will be be used in the upcoming frames.

The preloading of the next frame's pins can only be done in machines in which a CCD camera is used for scoring and pin-count purposes. Otherwise, the pin table needs to lower itself empty after the second ball is rolled in order to provide pin-count information to the automatic scoring machine.

The presence (or lack of) a camera, along with the results of the second ball, will determine the next cycle. Assuming that a camera is present, the next cycle consists of a simple sweep of the pins and a placement of 10 new pins on the lane for the next frame. Several other cycles are possible, however, including preset cycles for fouls and out-of-range pins.

Newer pinsetters have advanced features and cycles that speed up play. The computer power in new pinsetters allows them to make more intelligent decisions, effectively decreasing delays. One example of these advances is the short cycle. Short cycles are specific cycles that are run if the 7 pin or 10 pin is knocked down and if no pins are knocked down. In these cases, there's no deadwood, so no sweep motion is necessary. This saves not only time but also wear on the machine.

Let's find out what else is going on behind the scenes. 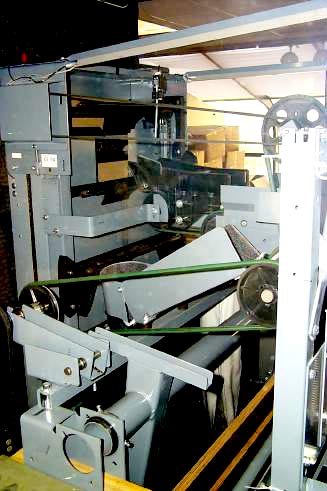 On the left, you can see the pin elevator on an older GS pinsetter.
Photo courtesy Bowl-Tech, Inc.

After a roll, the ball and the knocked-down pins are located behind the lane in the ball pit. Below the ball pit is a conveyor belt called the transport band. The pins and ball fall onto this band and are moved toward the pin elevator. The bowling ball takes a detour at some point along the transport band, veering off through a specially designed ball door. Only the ball is heavy enough to trigger the sensor necessary to open the door, so only the ball can go through. The ball is then accelerated through a conveyor system under the lane, back toward the bowler for the next roll.

The pin elevator raises the pins from the ball pit to the level of the pin distributor.

The pins on the transport band continue toward the pin elevator. The pin elevator consists of about a dozen trays located on two pulleys. The pins funnel onto the trays and are raised up toward the pin distributor. The distributor is located above the pin table. It helps place new pins into the pin table so they are ready when a new rack is needed.

The pin distributor sorts the pins onto the pin table so that every pin station is filled.

The distributor has a mechanism known as a shark switch that pivots a funnel-like tray back and forth onto either of two conveyor belts. The position of the switch is determined by electronics in the pinsetter that know exactly where a new pin is needed. Each of the two conveyor belts has a number of pin stations where the pins settle into the pin table. The pins are kicked off the conveyor belt into the pin stations by bumper devices controlled by the main electronics (which determine where a pin is needed). Once the new pins are loaded, the pin table pivots horizontally, turning the bowling pins upright, and lowers them onto the lane at the proper time.

For lots more information on bowling pinsetters and related topics, check out the links on the next page.