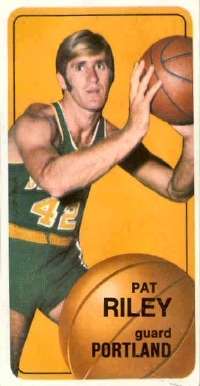 Pat Riley is 3-time Coach of Year and 2nd on list of all-time coaching victories behind Lenny Wilkens. See more pictures of basketball.

Based on the numbers, Pat Riley is perhaps the greatest coach in NBA history. His teams had winning records in his first 19 seasons and sported a winning percentage of .610 or better in all but one of them. Riley owns seven NBA championship rings -- one as a player, one as an assistant coach, four as head coach of the Showtime-era Los Angeles Lakers, and one as head coach of the Miami Heat.

Riley's Lakers played glamorous, fast-moving basketball. In New York, where he coached for four seasons, Riley adjusted for his personnel, creating the league's most fearsome defense. With the Miami Heat, the team he joined in 1995, Riley set out to make a winner out of a perennial loser.

In each locale, Riley has run his team with corporate efficiency, demanding commitment and sacrifice while operating with what Vanity Fair called an "almost messianic intensity." He grinds through endless hours of videotape, devours statistical minutia such as "passes to the open man" and "dives for loose balls," and conducts grueling practice sessions. The NBA once fined him $10,000 for running an illegal practice on New Year's Day.

Born March 20, 1945, in Rome, New York, Riley was cut from athletic cloth; his father played major-league baseball and his brother played in the NFL. A prep football and basketball star, Pat opted for basketball at the University of Kentucky, where he learned coaching from legend Adolph Rupp.

A 6'4'' guard, Riley averaged 18.3 points in three seasons and led "Rupp's Runts" to the 1966 NCAA championship game. In 1967, he began a nondescript career in the NBA, averaging 7.4 points per game in stints with the San Diego Rockets, the Lakers, and the Phoenix Suns. He retired from playing in 1976.

After a soul-searching year away from the game, Riley joined the Lakers broadcasting team for two seasons, then moved to the bench as Paul Westhead's assistant in 1979, arriving at the same time as rookie Magic Johnson. Eleven games into Riley's third season, he replaced Westhead at the helm. His teams won championships in 1982, 1985, 1987, and 1988.

Having grown stale in L.A., he quit in 1990, then returned to coaching a year later with the Knicks, where his New York clubs presented the Chicago Bulls their greatest post-season challenges without ever actually pushing past them into the NBA Finals.

Today, Riley is considered a master motivator, a best-selling author who can command a healthy, five-figure fee for a corporate speaking engagement. No better and more timely proof of his leadership ability could come than coaching the once-ragtag Heat to the title in 2006.