Browse the article The Posters of the Olympics 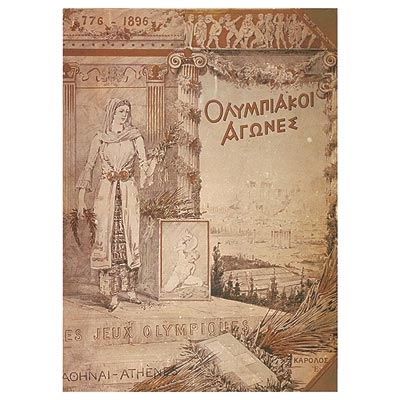 Technically, there was no official poster for the 1896 Athens Olympics, the first of the modern games, so the cover page of the official report is often used as a stand-in. It featured the Acropolis and a young woman representing Athena prepared to present an olive branch to the victor. 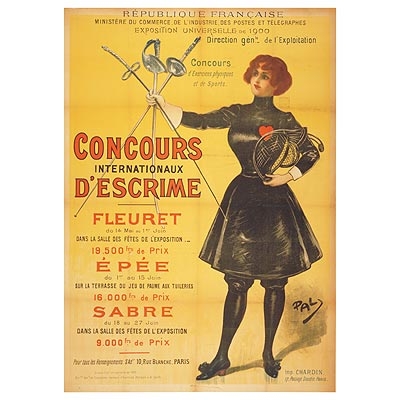 In 1900, several posters were created for the different events held in Paris. This one featured a lady fencer (although women did not actually compete in fencing until 1924) flourishing a saber, foil and sword. 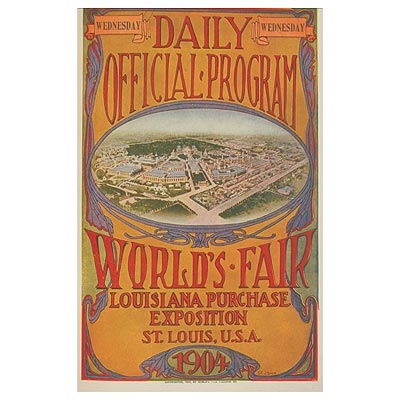 This poster is a reproduction of the cover of the Olympic program, which took place during the World's Fair in 1904. It shows a fish-eye view of the city of St. Louis. 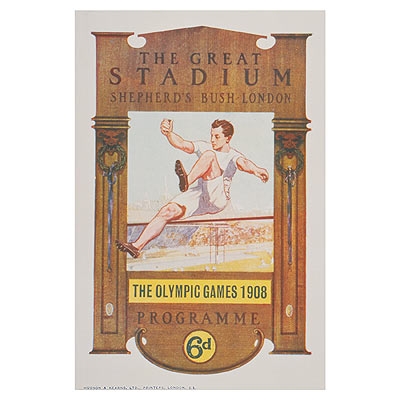 In 1908, the London poster highlighted a variety of sports and their venues, including the high jump, the swimming pool and the track. 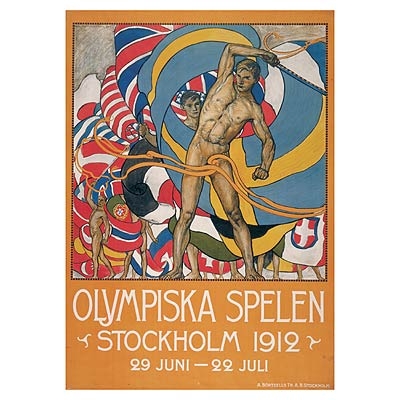 The poster of the Stockholm 1912 games paid homage to the parade of nations. The nudity of the athletes was considered too risqué for some, however, so the poster was not distributed universally. 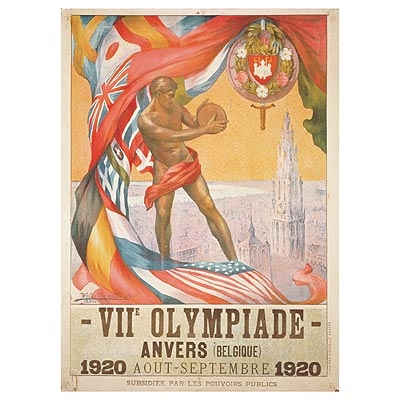 Thanks to World War I, the 1916 games were skipped, so when everyone came back together in 1920 for the Antwerp games, the poster was meant to depict all the nations' flags flying as one. It also paid tribute to the Olympics of Antiquity; in the center was a representation of a discobolus, or discus thrower. 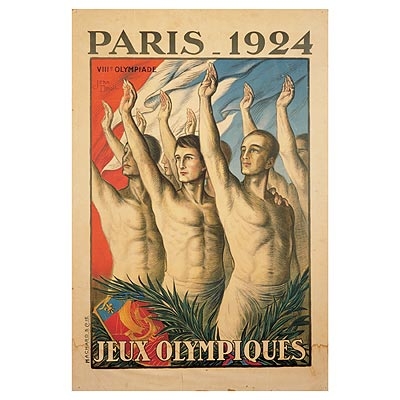 The poster for the 1924 Paris summer games was another shout-out to the athletes of old. The athletes were also making the Olympic salute. The flag of France rippled in the background, and palm leaves adorned the foreground. This was also the year that saw the games split into separate winter and summer contests, but we'll stick to summer posters here. 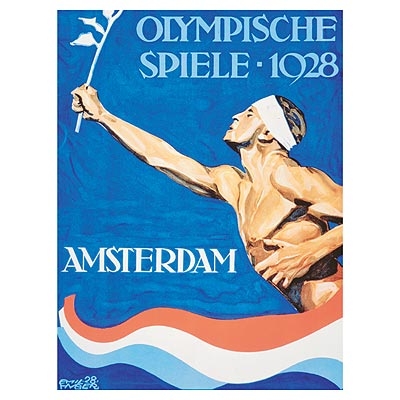 When the people of Amsterdam got the summer games in 1928, they designed a poster that featured a runner sailing forth with a laurel branch. The colors along the bottom are those of the Dutch flag. 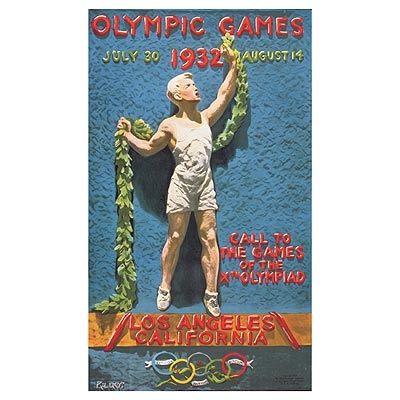 The 1932 summer games were held in Los Angeles. That poster was designed to symbolize the ancient custom whereby a Greek athlete would announce the next Olympiad and call for a cessation to any current hostilities. 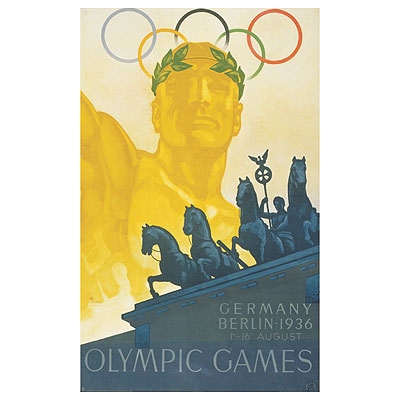 In the foreground of the 1936 Berlin poster for the summer games was the city's Quadriga, a famous landmark. In the background, a wreathed winner posed in the Olympic salute. 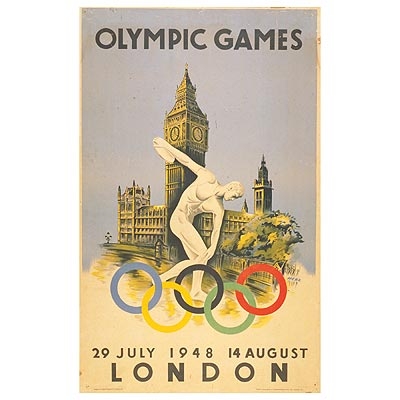 World War II guaranteed there were no Olympic posters (or Olympics) in 1940 and 1944. But in 1948, London hosted the summer games, prominently displaying the Houses of Parliament and Big Ben in the background of the poster. Another, more classical representation of the famous Discobolus statue stood at the center of the scene. 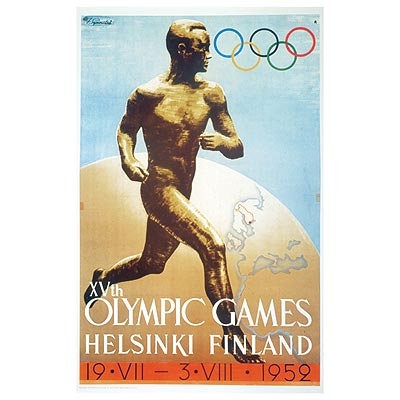 Helsinki hosted the 1952 summer games (they were originally supposed to host in 1940), and the city’s Olympic committee simply updated the poster to reflect the new dates, along with other very minor modifications. 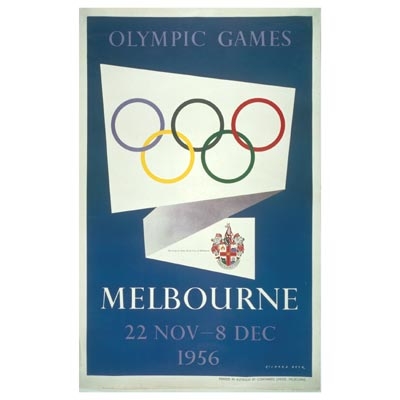 The 1956 summer games headed to Melbourne. The poster was in the image of an invitation card. The first flap held the Olympic rings, and the third depicted the official arms of the city. 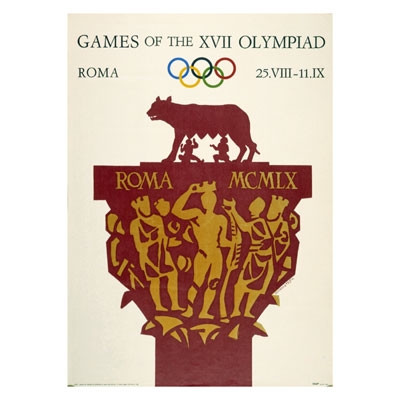 In 1960, Rome hosted the summer games. Remus and Romulus -- the legendary founders of Rome -- were shown suckling on the she-wolf who helped them survive to maturity. The column on which they stood depicted a victorious athlete receiving his crown. 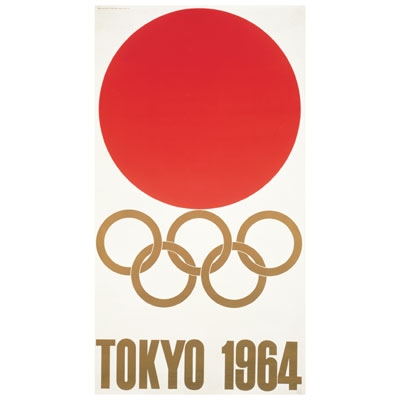 This was one of four official posters used to promote the 1964 Tokyo summer games. It showed the emblem from the Japanese flag (a symbol denoting the rising sun), along with the Olympic rings. 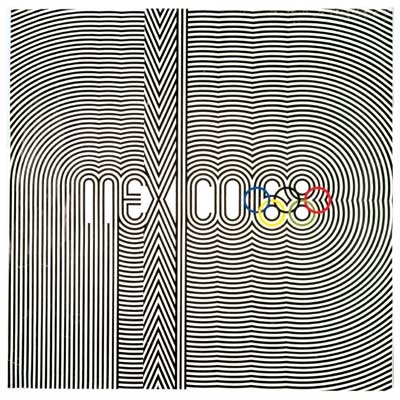 You’re looking at one of the posters for Mexico City’s 1968 summer games -- other variations, apart from this one in black, were printed in blue, green, red and yellow. 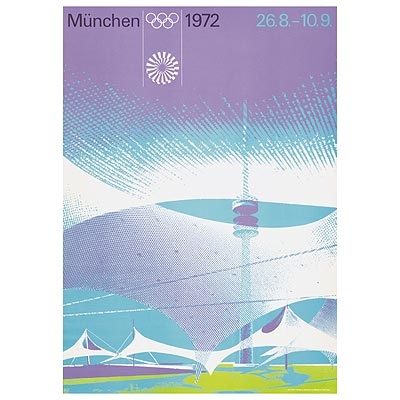 Munich's 1972 summer games were heralded with numerous posters, many dedicated to specific sports and cultural events. The official poster, however, was meant to symbolize the entirety of the Munich games. It shows the modern architecture of the venues, with the Olympic tower in the background. 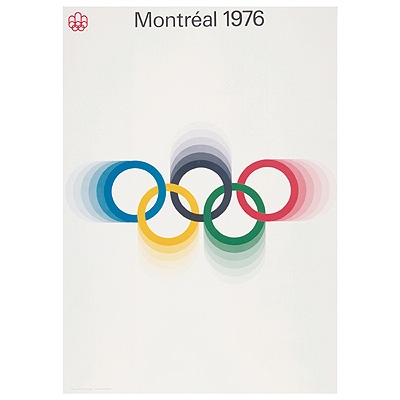 Montreal went with a minimalist design for its official 1976 poster. The five Olympic rings echo outward, symbolizing an invitation to nations far and wide. 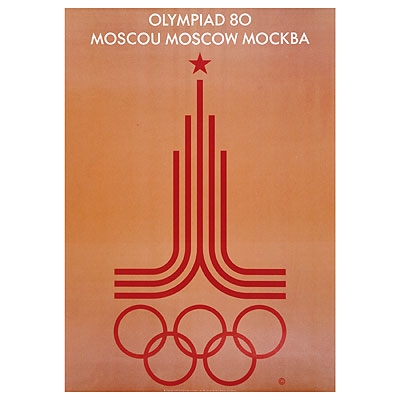 Moscow's 1980 summer games poster started with the Olympic rings, followed by a set of track lines ending in a typical architectural view in the Moscow skyline, topped with a five-pointed star. 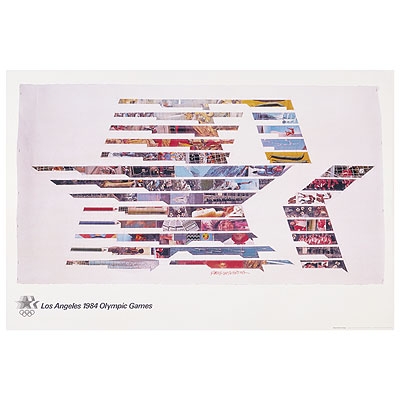 The 1984 Los Angeles summer games featured several posters. This one denoted a star, symbolic of the aspirations of man. The bars splitting to either side were inspired by the speed that athletes exhibited in the games. Many Olympic dreams were realized in LA that year, as they would be for Olympiads to come, all decorated with new and exciting posters heralding the unique gifts and dedicated efforts that every Olympian shares in common.