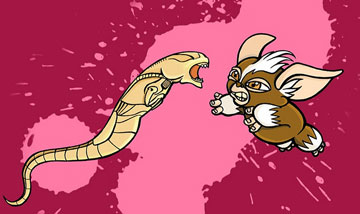 Are mogwai an alien bioweapon? Are they really that different from our old friend the xenomorph?
Travis Falligant/Creative Commons

With the naturalist theory out of the way, it's time to think cosmically about gremlin and mogwai origins.

Extraterrestrial theory: Simply put, this theory argues that mogwai and gremlins differ dramatically from terrestrial modes of life because they're not native to our planet. For instance, they may have evolved on a much dryer world, where the occasional wet season or plentiful water source served as a call for massive asexual reproduction. Their circadian metamorphosis cycle might make more sense on their planet of origin -- perhaps a world of epically long days and nights. On such a planet, their furry mogwai form might allow the creatures to survive chilly seasons of night. Likewise, their post-midnight metamorphosis would have originally ensured that the creatures didn't mature into their hairless adult forms until the warmer day-season approached. Sadly, we won't know the answer to these questions until we actually discover such a theorized gremlin home world.

Biological weapon theory: Finally, some scientists point to the gremlin's destructive nature as proof positive of its origins as an extraterrestrial biological weapon. Think about it: They reproduce like wildfire and have a tendency to wreck everything in sight. Oh, and they initially take the form of an irresistibly adorable snuggle buddy before transforming into a murderous monster. If left unchecked by human efforts, the creatures would quickly overrun terrestrial ecosystems and convert all available organic material into gremlin flesh. In short, they are invasive and unsustainable because they were genetically engineered to eradicate all life on Earth.

Who would unleash such a weapon? And why? Did some advanced species of engineers decide that life on Earth was headed in a disastrous direction? Is it any wonder that gremlins spread so rapidly during the 20th century, as war raged around the globe and humans entered the Atomic Age? These questions remain unanswered, but if mogwai and gremlins were invented to destroy us, we should thank our lucky stars that they melt in sunshine and are also so easily distracted by costumes, movies and musical numbers.

In his 1984 novel "Gremlins," noted mogwai/gremlins theorist George Gipe claimed that an alien scientist named Mogturmen invented the creatures on the planet Enz. While largely discredited in scientific circles, this account remains the basis of most so-called gremlin cults, who worship mogwai as avatars of the cosmic godhead. The cultists also see the gremlin as representing the destructive aspects of God, much like Shiva in Hinduism.