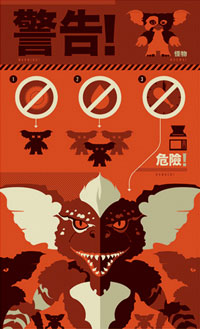 We all know better than to feed a mogwai after midnight. Even the creatures themselves (or at least the more intelligent specimens) seem to understand the wages of 3 a.m. nachos: complete metamorphosis.

Needless to say, "after midnight" is a bit vague, especially when you factor in time zones. To be clear, the ingestion of food only triggers gremlin metamorphosis in the hours immediately following solar midnight, the opposite of solar noon. In other words, regardless of what the clock says, it all comes down to the position of the sun in relation to the mogwai's location. In fact, over the course of a year, solar midnight rarely lines up with clock midnight and depends instead on longitude and season.

How does the mogwai's body know when solar midnight occurs? As with most animals, it comes down to the creature's circadian rhythm, a 24-hour physiological cycle present in most organisms. Far more than a mere pattern for wakefulness and sleep, it affects a host of biological processes, including hormone production and cell and brain activity. While mostly dependent on the solar cycle, light levels and temperature also modulate circadian rhythm.

Brazilian big-eyed bats (Chiroderma doriae) and urban European hedgehogs (Erinaceus europaeus) both engage in post-midnight feeding activity, all thanks to the "programming" of their circadian rhythms. It's the same with mogwai: Their circadian rhythm triggers the hormonal functions responsible for full metamorphosis. During this state they're essentially primed for transformation -- all they need is a huge meal to trigger the change.

Why do midnight feedings trigger the change? We'll discuss the theories on the next page.

Land of the Midnight Gremlin

If you live north of the Arctic Circle, then you're accustomed to the long stretches of 24-hour darkness and 24-hour daylight that accompany life here. As you might imagine, these solar patterns make mogwai ownership in the far north a rather risky proposition. It confuses the circadian rhythms of human and mogwai alike. In humans, this can lead to such ailments as obesity and bipolar disorder. In gremlins, it can both stunt and stimulate the creature's susceptibility for food-induced metamorphosis.