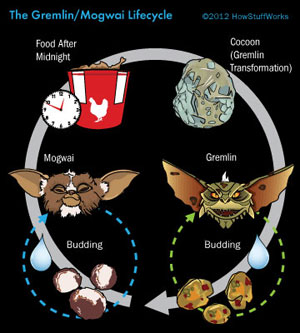 Chicken after midnight: Not a good idea.
HowStuffWorks.com

While the mogwai budding cycle can certainly continue in a closed circle, another important biological event defines the mogwai life cycle: metamorphosis.

While other vertebrates such as amphibians regularly undergo metamorphic changes, the mogwai/gremlins' potential transformation differs dramatically from that of tadpoles and frogs. In fact, the entire process closely resembles the change we see when a caterpillar turns into a butterfly.

When a mogwai gorges after midnight (more on this later), it cocoons itself inside a chrysalis formed from secreted bile and its own hair. Within this leathery shell, the creature essentially melts. Enzymes break most of the mogwai's body down into a rich bath of imaginal cells. Like stem cells, imaginals can differentiate into other cell types. As with a caterpillar's transformation, these cells serve as the building blocks of the organism's new body

What emerges from the chrysalis is, of course, a gremlin. Although the creature retains some of its mogwai facial and cranial features (plus all of its prior memories), the rest is startlingly different.

While the mogwai is furry and omnivorous, the reptilian-looking gremlin is largely hairless and geared toward a more predatory, carnivorous lifestyle. Its claws and teeth easily tear flesh. Its enhanced strength, speed and dexterity enable it to apprehend prey and more effectively fend for itself against other animals. Given the choice, however, it's also perfectly happy to steal pizza and beer.

Curiously enough, the gremlin also undergoes asexual budding but only produces gremlin-stage offspring in the process. How then, you might ask, would this perplexing life cycle ever come back around to the cuddly mogwai? Think back to the hydra: This tiny freshwater predator is capable of both sexual and asexual reproduction.

Is it possible that mogwai/gremlins were once capable of sexual reproduction as well, enabling even fully developed gremlins to mate and produce mogwai offspring? If this theory holds true, it means the creatures gradually lost the ability to sexually reproduce and depend exclusively on asexual budding for propagation -- a reality that might eventually eliminate mogwai altogether.

Mogwai aren't the only organisms capable of reproducing before they undergo metamorphosis. Many invertebrates and even some salamanders experience paedogenesis, in which larvae breed without advancing into full-fledged adults.