Did Lucille Ball Use Her Fillings to Spy? 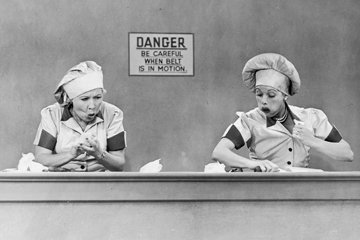 If Lucille Ball hadn't eaten all of that candy, would the dental filling-spy legend even exist?
CBS Photo Archive/Getty Images

Lucille Ball is one of the few true Hollywood legends. Emmy-winning comedic actress, creator and star of a groundbreaking TV comedy, first female head of a major TV studio — the list goes on. She was also known for her shrewd business sense and straight-shooting honesty. But there's one weird blip in Ball's life story, and it has morphed into another sort of legend — the urban kind. If it's true, it's just a strange but charming story about an actress who made an inadvertent discovery. If it isn't true, we might have to rethink our assumptions about Lucille Ball — at least the "straight-shooting honesty" part.

Here's the story: One evening in 1942 (in the thick of World War II), Ball was driving home from a day of movie filming when she suddenly heard music — and then realized the sounds weren't emanating from the car radio but from her mouth. The next day, Buster Keaton told her that her new lead dental fillings had probably been broadcasting a radio station. A week later, also on the commute home, her mouth started emitting Morse code. This time she alerted the authorities, and the FBI eventually busted a Japanese gardener who was operating a spy ring out of a tool shed.

Sounds like the ultimate urban legend, right? But this isn't a baseless rumor started by an anonymous gossipmonger. The source is Ball herself — she told the story on "The Dick Cavett Show" in 1974 and to at least two biographers. The tale has morphed over the years (at no time, for example, did Ball ever claim she actually used her fillings to spy), but the basics remain the same, and Ball always stood by them.

The problem is, the entire tale is pretty much unverifiable — other than Ball's accounts, there seems to be no record of the case. The generally reliable Snopes.com pronounced its status "undetermined." The TV show "MythBusters" used several angles to investigate the story in 2003 and couldn't confirm any of Ball's claims. The hosts had no luck with their experiments involving vintage radio equipment and human skulls fitted with fillings. They concluded that the combination of the metals and Ball's saliva caused a galvanic reaction, which created a current in her mouth that could have resembled Morse code. The real kicker, though, was the revelation that Ball's FBI file does not mention the case.

So why would Ball have invented such a story? No one has the answer to that, either. At the height of the Communist scare in the '50s, she was briefly investigated by the House Un-American Activities Committee, so some think she might have created the fillings story to seem more patriotic. But that's a pretty big stretch; there are so many easier, non-crazy ways to broadcast that message. In the end, only Lucy knows ... and maybe that's just how it's supposed to be.